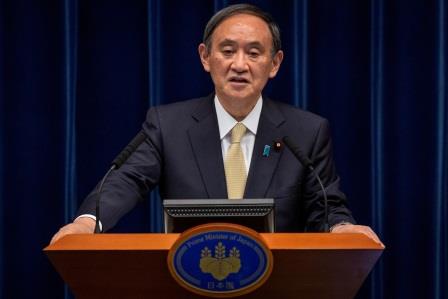 Suga’s ruling Liberal Democratic Party (LDP) lost all three seats in parliamentary by-elections on Sunday, polls widely seen as a verdict on his administration and a bellwether for a crucial Lower House election later this year.

The votes, for seats in both the Upper House and the more powerful lower chamber, were the first significant ballots since Suga took power last September. Two of the seats were left open due to political scandals and a third after the death of a lawmaker from COVID-19.

“I intend to take the people’s decision with humility, and make amends where amending is necessary after conducting further analysis,” Suga told reporters on Monday, adding that fighting the pandemic is his priority.

Anger with a vote-buying and a separate bribery scandal, as well as with the government’s handling of the pandemic and a tortuously slow vaccine rollout, played about equal roles on the election outcome, analysts said. [

Though Japan has not suffered as badly as other nations, the government has struggled to cope with a recent surge in cases and on Friday imposed a third state of emergency on parts of the country just three months before the Olympics are set to open.

Only one vaccine has been approved for use in Japan, with roughly 1 percent of the population having been fully vaccinated so far.

“Two of the elections were held due to scandals, so that was definitely in the background,” said Airo Hino, a political science professor at Waseda University.

“But anger and frustration on the part of the people due to how the pandemic’s being handled, and the slowness of the vaccine rollout, also played a part.”

Suga’s support rating stood around 70 percent when he took office in September last year by replacing Shinzo Abe, who resigned due to health reasons after becoming Japan’s longest-serving premier. His rating plunged to the 30 percent level earlier this year but has since recovered slightly.

The LDP had been expected to lose in two of the three races and didn’t even field a candidate in one. But the loss in conservative Hiroshima prefecture, where the previous lawmaker was found guilty in a vote-buying scandal, is a serious blow to Suga, already facing dissent within the LDP.

Talk has swirled for months about possible snap elections, but a lack of good candidates to replace Suga as well as the bad optics of holding a campaign while coronavirus cases surge means such a move is unlikely until September, when the LDP presidential race is due. An election for the more powerful Lower House must be held no later than October.

Thanks to Sunday’s vote, Suga could find re-election a tough battle.

“The strong trend in Japanese elections these days is to vote more according to the party leader, rather than any particular candidate,” said political analyst Atsuo Ito.

“There’s no question that worry about whether Suga is the face the LDP wants to fight an election with is growing.”

Hong Kong-Singapore travel bubble to start on May 26