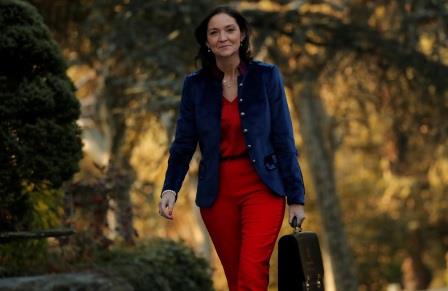 MADRID (SPAIN): Tourism Minister Reyes Maroto said she had received a knife covered in red stains in the post and the National Police said they had identified a person believed to have sent the knife and the investigation was ongoing.

Media had reported that the main suspect was a man with mental health issues and that police were not linking the incident to a recent series of death threats to other public figures.

Politicians across the political spectrum initially raised the alarm when Maroto said she received the package. The knife had arrived on Friday with a return address on the package, she said.

Investigators did not believe the suspect had any link to death threats mailed last week to Interior Minister Fernando Grande-Marlaska, Pablo Iglesias of Unidas Podemos, and Maria Gamez, who heads the Guardia Civil police force, La Sexta and the othe media said.

Without suggesting who might be behind those earlier letters, Marlaska on Monday blamed a culture of political polarisation for allowing hate speech to flourish.

He linked the threats to the recent vandalism of a feminist mural in Madrid and the defacement of a statue of former socialist Prime Minister Francisco Largo-Caballero.

“All this generates a belief that it is OK to discriminate … against certain groups,” he said on La Sexta television.

Tension between right and left has ratcheted up in recent weeks ahead of a regional election in Madrid, where conservative incumbent Isabel Diaz Ayuso is running with the slogan “Communism or Freedom”.

Iglesias, who is standing against her for the far-left Unidas Podemos, walked out of a debate on Friday after Rocio Monasterio, his opponent from the far-right Vox party, questioned whether the last week’s threats were real.

Nationally, the Spanish government is led by the Socialist Party (PSOE), with Unidas Podemos as its junior coalition partner.