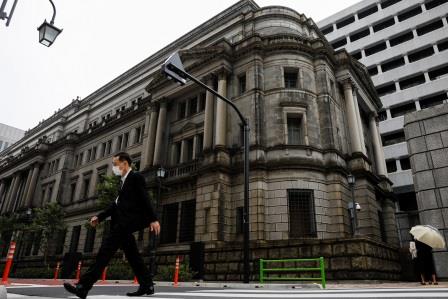 FILE PHOTO: A man wearing a protective mask walks past the headquarters of Bank of Japan amid the coronavirus disease (COVID-19) outbreak in Tokyo, Japan, May 22, 2020.REUTERS/Kim Kyung-Hoon

TOKYO (JAPAN): As fresh curbs to combat a spike in COVID-19 cases overshadow the boost to growth from solid global demand, Japan’s central bank maintained its massive stimulus on Tuesday and projected inflation missing its 2% target for years to come, .

The Bank of Japan also warned of “high uncertainty” on how much the pandemic could drag on growth, signalling its readiness to keep its money spigot wide open for the foreseeable future.

Japan last week declared a third, two-week state of emergency for Tokyo, Osaka and two other prefectures to contain the pandemic, clouding prospects for a fragile economic recovery.

In a quarterly report released after Tuesday’s rate review, the BOJ slightly revised up its growth forecast and stuck to its view the world’s third-largest economy would recover as robust U.S. and Chinese demand underpins exports.

But the bank cut this year’s price forecast and predicted for the first time that inflation would stay well short of its 2% target beyond Governor Haruhiko Kuroda’s term, which ends in early 2023.

“Japan’s economy is likely to recover, though the level of activity will be lower than before the spread of the pandemic mainly for sectors that offer face-to-face services,” the BOJ said in the report.

“We will take additional monetary easing steps without hesitation as needed with a close eye on the impact of the pandemic,” it said.

As widely expected, the BOJ maintained its short-term interest rate target at -0.1% and that for 10-year bond yields around 0%.

Markets are focusing on Kuroda’s post-meeting briefing for his views on how the new state of emergency curbs could affect Japan’s economy and the price outlook.

“It suggests the BOJ will have no choice but to continue its ultra-loose policy even after Kuroda’s current term ends.”

The BOJ trimmed its core consumer inflation forecast for the fiscal year that began in April to 0.1% from 0.5% estimated in January.

The cut was due largely to the effect of cellphone fee cuts, the BOJ said. When excluding such transitory factors, consumer inflation is moving on a “firm note,” it added.

“While it will take time, consumer inflation will gradually heighten towards the BOJ’s target,” the report said.

The central bank projects inflation to accelerate to 0.8% in fiscal 2022 and 1.0% the following year, the report showed.

Markets largely expected the BOJ to stand pat, after it conducted a review of its tools in March to make them sustainable enough to weather an expected prolonged battle to fire up inflation.

Eight years of stimulus attempts by Kuroda have failed to fire up inflation to his 2% target. Japan’s core consumer prices fell for the eighth straight month in March as the blow from the pandemic weighed on consumption and wages.