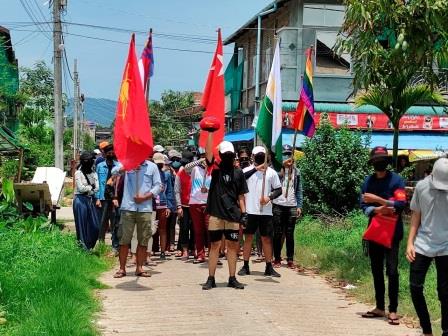 Demonstrators carry flags as they march to protest against the military coup, in Dawei, Myanmar April 27, 2021. Courtesy of Dawei Watch/via REUTERS

Karen National Union (KNU), the ethnic minority insurgents attacked a Myanmar army outpost near the Thai border on Tuesday. The Myanmar military later hit back against the insurgents with air strikes, the KNU and Thai authorities said.

KNU, Myanmar’s oldest rebel force, said it had captured the army camp on the west bank of the Salween river, which forms the border with Thailand, in some of the most intense clashes since a military coup nearly three months ago threw the country into crisis.

The fighting took place as the junta, in a setback for diplomatic efforts by the Association of Southeast Asian Nations (ASEAN), said it would “positively” consider the bloc’s suggestions to end the turmoil in Myanmar but only when stability was restored.

The ASEAN leaders said after meeting on the weekend with the junta chief that they had reached a consensus on steps to end violence and promote dialogue between the rival Myanmar sides.

The outbreak of hostilities near the border shifted the focus of opposition to the junta away from the pro-democracy protests that have taken place in cities and towns across the country since the coup on Feb. 1.

The military overthrew the elected government of Aung San Suu Kyi, detained her and other civilian politicians, then cracked down with lethal force on anti-coup protesters.

Security forces have killed more than 750 civilians in the demonstrations, an activist group says.

The Karen and other ethnic minority forces based in frontier regions have supported the largely urban-based pro-democracy opponents of the junta.

In Tuesday’s fighting, villagers on the Thai side of the river said heavy gunfire started before dawn.

The Myanmar military later mounted air strikes, Saw Taw Nee said. There was no word on casualties and 450 Thai villagers were moved away from the border to safety, the Thai military said.

The Myanmar army made no comment. It has historically portrayed itself as the one institution that can keep together the ethnically diverse country of more than 53 million people.

The KNU agreed to a ceasefire in 2012, ending its struggle for autonomy that began shortly after Myanmar’s independence from Britain in 1948.

But its forces have clashed with the army since it seized power, ending a decade of democratic reforms that had also brought relative peace to Myanmar’s borderlands.

Fighting has also flared in the north and west, where the Irrawaddy news site reported 13 government soldiers were killed in clashes in Chin State over the past few days.

About 24,000 people are sheltering in the jungle after being displaced in recent weeks by violence near the Thai border, including military air strikes, Karen groups say.

Elsewhere in Myanmar, there have been few reports of bloodshed since the weekend meeting between the junta chief, Senior General Min Aung Hlaing, and Southeast Asian leaders to try to find a way out of the crisis.

The junta, in its first official comment on the meeting, said it would give “careful consideration to constructive suggestions … when the situation returns to stability”.

The suggestions would be “positively considered” if they facilitated the junta’s own “roadmap”, and “serves the interests of the country”, it said in a statement.

The junta did not refer to what ASEAN called a five-point consensus, issued at the end of the meeting, to end the violence and initiate talks.

ASEAN’s points included appointing an envoy to visit Myanmar for talks with all sides. But Min Aung Hlaing, in comments reported in state media, said: “The visits to Myanmar proposed by ASEAN will be considered after stabilising the country.”

U.N. Special Rapporteur Thomas Andrews called on Min Aung Hlaing to make a commitment to live up to the ASEAN plan.

“The people of Myanmar…need and deserve to know if it is your intention to honour this commitment,” Andrews said in an open letter.

Activists have criticised the plan, saying it helped to legitimise the junta and fell far short of their demands.

In particular, it did not call for the release of Suu Kyi, 75, and other political prisoners. The Assistance Association for Political Prisoners advocacy group says more than 3,400 people have been detained for opposing the coup.

Suu Kyi’s party won a second term in November. The election commission said the vote was fair but the military said fraud at the polls had forced it to seize power.

Protesters against the junta were out in several places on Tuesday including the main city of Yangon, where hundreds surged down a street in a “flash mob” march, images on social media showed.