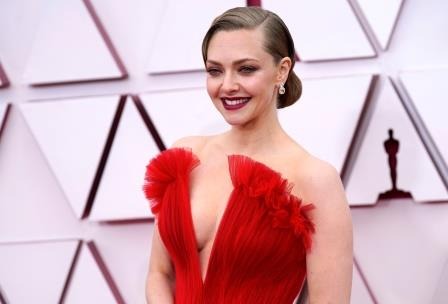 LONDON (UK): Amanda Seyfried and James Norton play a young couple whose marriage and life unravel when they move to a haunted house in upstate New York in supernatural thriller “Things Heard & Seen”.

Based on Elizabeth Brundage’s novel “All Things Cease to Appear”, the Netflix film tells the story of Catherine and George Claire, who leave Manhattan for the tiny town of Chosen with their 4-year-old daughter after George is offered a teaching job at a nearby college.
Catherine gives up her career to support her husband and focuses on turning an old dairy farm into a family home, helped by two local orphans who seem closely attached to the house. With George increasingly away and basking in the attention of his young female students, Catherine soon finds herself isolated and scared by unexplained events in their new home.

The film is Seyfried’s second horror movie outing in a year following the 2020 title “You Should Have Left”. “That’s my favourite genre. I just can’t get enough of it. It’s a supernatural thriller but. what was so attractive to me was that I got to play one half of a really, really dysfunctional marriage,” the “Mamma Mia!” star said.
Norton said the movie, set in the 1980s, touches on themes relevant today. “There’s something about his journey which unfortunately, particularly in light of #MeToo in the last few years, we see those types of men threatened by women. We see women make sacrifices for that guy. And it just makes no sense. It’s so antiquated. This is like the horror version of that, when a young and amazing woman sacrifices her life for the monster of a man that she ends up marrying,” he said

“Things Heard & Seen” is written and directed by filmmaker duo Shari Springer Berman and Roberto Pulcini who set out to “honour the spirit” of Brundage’s book while drawing inspiration from the “dramatic and spooky” landscape of the Hudson Valley.
Once filming began they found that the spookiness wasn’t limited to the landscape. “The house we filmed in had a lot of unexplained sounds going on and we had to stop filming often and send somebody up to the attic to see what exactly was going on up there,” Pulcini said.
“Things Heard & Seen” releases globally on Netflix on Thursday.