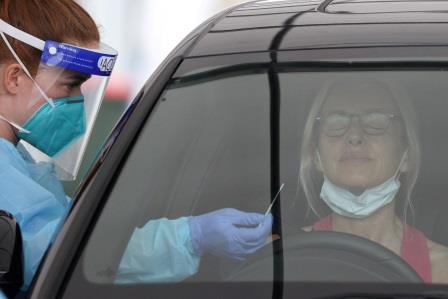 FILE PHOTO: A medical worker swabs a member of the public at the Bondi Beach drive-through coronavirus disease (COVID-19) testing centre as the city experiences an outbreak in Sydney, Australia, December 21, 2020. REUTERS/Loren Elliott

Health authorities are working to trace the source of the infection.

Australia has largely eradicated COVID-19, but a man in his 50s with no known links to hotels used to quarantine people who have arrived from overseas tested positive for the coronavirus on Tuesday, the New South Wales (NSW) Ministry of Health said in a statement.

The unnamed man visited several venues in the eastern suburbs of Sydney, the capital of NSW and Australia’s biggest city, the ministry said.

Testing on the man showed his viral load was higher than typically seen in other infected people, potentially increasing the chance he has spread the disease, the ministry said. The man is considered to have been infectious since April 30.

“That give us some cause for concern,” NSW’s Chief Health Officer Kerry Chant told reporters in Sydney.

All close contacts of the man have been told to self-isolate and get tested, Chant said.

The case elevates the chance that social distancing restrictions will once again be imposed in NSW. Many curbs had been eased as local infections dwindled.

Testing is underway to find if this case is genetically linked to anyone in the quarantine system or cases in other states, Chant said.

Australia has taken a hard-line approach to curtail the spread of COVID-19, including snap lockdowns, border controls and speedy contact tracing systems.

As a result, Australia has recorded just over 29,800 cases and 910 deaths since the pandemic began, winning global acclaim.

However, Prime Minister Scott Morrison’s decision to block all travel for two weeks from India, which is in the midst of a massive wave of COVID-19 infections, has been widely criticised.

Anger increased after the government announced on Saturday that attempts to enter from India could be punished with prison sentences of up to five years and fines.

Australia has for more than a year allowed only citizens and permanent residents to return though they must undergo two weeks of strict quarantine upon their entry.

Morrison on Wednesday defended the ban, insisting it has prevented hotel quarantine sites from being overrun by COVID-19 infections.

“This was a necessary step to ensure that we could help more Australian citizens and residents get home, safely, in a way that did not risk a third wave in Australia,” Morrison said during a televised press briefing in Queensland state.