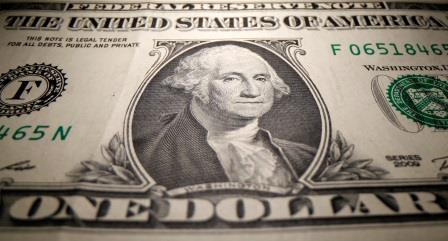 FILE PHOTO: A U.S. Dollar banknote is seen in this illustration taken May 26, 2020. REUTERS/Dado Ruvic/Illustration

SINGAPORE: As talks about the possibility of higher US interest rates and a sell-off in tech stocks soured risk sentiment to the benefit of the safe-haven currency, dollar tried to extend a rally on Wednesday

“If sustained, this could suggest today’s session may be important for near-term direction, particularly if EURUSD managed to close below the key $1.20 pivot,” said Ned Rumpeltin, European head of FX strategy at TD Securities.

“We think we will need to see a daily close below the $1.20 mark to give more credence to observations that the USD tends to appreciate broadly during the month of May.”

Against a basket of currencies, the dollar was barely changed around 91.21 but away from a recent two-month low of 90.422. It needs to clear resistance at 91.425 to extend the rebound.

Rumpeltin noted that over the last 10 years, the dollar had averaged gains against each of its G10 counterparts in May.

The bounce was partly sparked by comments from U.S. Treasury Secretary Janet Yellen that rate hikes may be needed to stop the economy overheating.

Yellen later downplayed their importance, but even the slightest mention of U.S. tightening has an outsized impact in markets that have become so dependent on monetary stimulus.

The effect was apparent in large-cap tech stocks, which suffered hefty losses overnight, dragging the Nasdaq down 1.88%.

So far, Federal Reserve Chair Jerome Powell has argued the labour market is still far short of where it needs to be to start talking of tapering asset buying.

That position could be tested on Friday should the April payrolls report be as strong as some are suggesting. The median forecast is for a rise of 978,000, but estimates stretch as high as 2.1 million.

Westpac analysts pointed to expectations for a blockbuster payrolls number as a factor helping the dollar build a base.

“The Fed’s more influential dovish core will have the last word, but that won’t stop more hawkish regional Fed presidents from producing the odd tapering headline,” they said in a note, adding the dollar’s uptrend could go as far as 92 if payrolls beat the lofty expectations.

Europe’s reopening and pick up in the vaccination pace there could limit the dollar’s gains, they wrote.

Trading was limited in Asia with Japan and China on holiday, but the New Zealand dollar blipped higher to $0.7170 when local jobs data proved strong than expected.

The dollar was steady on the yen at 109.31 and again needs to break resistance at 109.61 to encourage more speculative bids.

One drag for the dollar is the U.S. trade deficit, which expanded to a record $74.4 billion in March.

“This is a medium-term weight on US dollar because the U.S. will become increasingly dependent on long term foreign investments to finance the current account deficit,” said Kim Mundy, a senior economist & currency strategist at CBA.

“As a result, we believe the recent USD downtrend has further to run.”