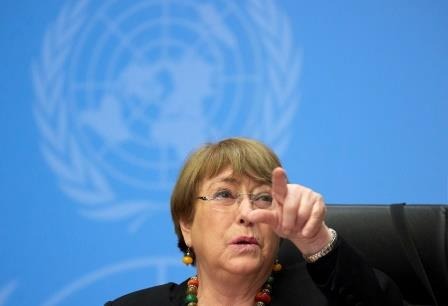 BUENOS AIRES (ARGENTINA): The United Nations human rights chief on Thursday cautioned over what according to her is the rising number of threats and attacks against independent human rights institutions in Latin America by local governments and others in positions of power.

Michelle Bachelet said in a statement that over the last two years her office had received increasing complaints from independent activist groups in the region that have been harassed and threatened by governments, lawmakers and vigilante groups.

Incidents include threats against groups in Bolivia, Chile and El Salvador as well as attacks against staff of a rights group in Haiti and pressure to remove the leaders of rights institutions in Mexico and Guatemala, the statement said.

Bachelet also voiced concern over Argentina’s failure to appoint a rights ombudsperson for over a decade.

“The fact that we have received complaints from institutions in almost a dozen countries in the region is striking testimony to the expanding trend and magnitude of the problem,” she said.

Bachelet, who is also the former president of Chile, called on respective authorities to investigate the allegations.