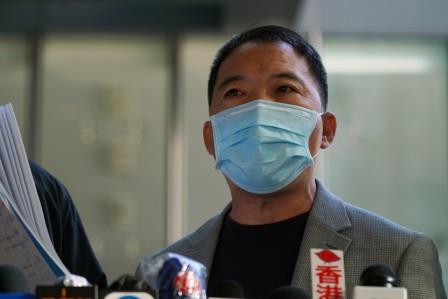 HONG KONG: Former Democratic Party leader Wu Chi-Wai, detained on charges of breaking the city’s national security law, was granted bail by a Hong Kong court on Friday so he can attend his father’s funeral, according to media reports.

Wu is among 47 opposition figures charged with conspiracy to commit subversion by participating in an unofficial, non-binding and independently organised primary vote last year to select candidates for a since-postponed city election.

Authorities said the vote was a “vicious plot” to “overthrow the government”, which falls under a national security law that Beijing imposed on the former British colony in July 2020. Most of the 47 have been denied bail.

The South China Morning Post said the funeral for Wu’s 92-year-old father was scheduled for Saturday and Wu filed an urgent bail application to the High Court after the Correctional Services Department had denied a bail request this week, citing safety concerns.

A spokeswoman for the judiciary could not immediately confirm the decision.

The case against the 47, which has included drawn-out bail hearings, has stunned many in Hong Kong, as well as diplomats and rights groups, who see it as a dramatic display of the Chinese-ruled city’s authoritarian turn.

The hearings have shone a light on a provision in the new law that sets a high threshold for defendants seeking bail to demonstrate they would not break the law, a departure from common law practice, which puts the onus on prosecutors to make their case for detention as an exception.

The application of the provision means defendants could spend months in custody before trials begin.

Wu, 58, had applied for a temporary release with the Correctional Services Department, which denied his request this week “to protect the safety of correctional officers, the subject person in custody and members of the public”.

The department said funeral arrangements had been posted online and it feared members of the public would heed online calls to attend to show support for Wu. Instead, it offered to livestream the funeral.

Wu and his family had rejected that option, the Democratic Party said in a statement.

“They find it intolerable (for authorities) to show such disrespect to his late father,” the party said.