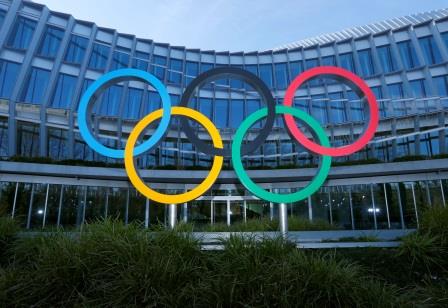 The Olympic rings are pictured in front of the International Olympic Committee (IOC) headquarters during the coronavirus disease (COVID-19) outbreak in Lausanne, Switzerland, January 26, 2021. REUTERS/Denis Balibouse/Files

SYDNEY (AUSTRALIA): While debate has raged over whether the Tokyo Olympics should go ahead this year, the Australian city of Brisbane has been moving closer to securing the hosting rights for the 2032 Summer Games. The deal is expected to be sealed as early as July.
Influential Australian Olympic chief John Coates said at the weekend that the International Olympic Committee (IOC) was completing due diligence on the bid before it was presented to the body’s Executive Board.
“The reality is this: For Brisbane and Queensland, the bell for the last lap has rung, we have final hurdles to clear before the tape is breasted,” Coates told the Australian Olympic Committee (AOC)’s Annual General Meeting on Saturday.
Brisbane has been the beneficiary of new IOC rules on bidding for the Olympics aimed at reducing the once astronomical cost of the process for aspirant cities.
After it was identified as a “preferred candidate” in February, the stakeholders in the bid, which will encompass the southeastern region of the state of Queensland, entered “targeted dialogue” with the IOC.
“The IOC has parked the other cities,” Coates said after the AGM. “If we fell over, they would have an opportunity again.”
Last month’s commitment from the Australian government to split the infrastructure costs 50-50 with local government allowed Queensland Premier Annastacia Palaszczuk to forward the necessary financial guarantees to the IOC.
After the due diligence phase, the next step towards Brisbane joining Melbourne (1956) and Sydney (2000) as Australia’s Olympic host cities will be a vote of the Executive Board, which next meets on Wednesday and again on June 8.
As a vice-president, Coates sits on the Executive Board but will be recused from that vote, which will decide whether the decision to award the Games to Brisbane will be put to a full session of the IOC.
As a seasoned bid campaigner, Coates was cautious about predictions that Brisbane could be declared hosts on July 20 at the IOC session in Tokyo ahead of the delayed 2020 Olympics.
“I won’t speculate on that because we’ve got to come through the due diligence. It has to go to the IOC Executive Board, and they’ll decide,” he added.

Pakistan wins over Zimbabwe, Shaheen gets his career best ‘five-for’