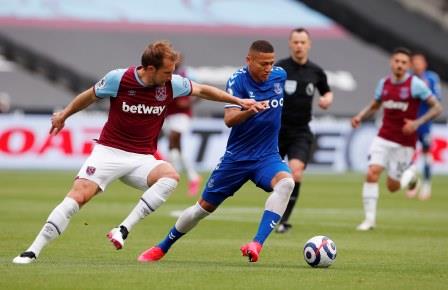 Dominic Calvert-Lewin’s 24th-minute goal proved decisive against a West Ham side who huffed and puffed but never really hit their stride on a crucial afternoon.

The closest West Ham came to an equaliser was when Vladimir Coufal’s shot hit the post and Jarrod Bowen could not bundle in the rebound from point-blank range.

Everton hit the post late on through Josh King and they hung on for the win that keeps them in the frame for a European spot.

West Ham remained in fifth place with 58 points, five points behind fourth-placed Leicester City with three games remaining. Liverpool are only a point behind West Ham with a game in hand.

Everton are eighth with 55 points and have four games left.

“That was a tough shift,” said Calvert-Lewin, who scored his 16th league goal of the season. “We worked hard and got away with the three points. It wasn’t pretty but I think with the effort we put in we deserved it in the end.”

With Leicester being surprisingly beaten by Newcastle United on Friday, West Ham could have moved to within two points of Brendan Rodgers’ side with a victory.

West Ham’s run-in also looks far more comfortable than Leicester’s, so Sunday’s clash at the London Stadium felt like a huge moment in the Hammers’ audacious bid for Champions League qualification for the first time.

But David Moyes’ team lacked spark against his former side Everton who clocked up an 11th away league win of the season, a total only bettered by Manchester City.

Everton began in confident fashion and took the lead when Ben Godfrey’s pass split West Ham’s defence open and Calvert-Lewin left Craig Dawson trailing before angling his shot past Lukasz Fabianski and into the net.

West Ham should have equalised before halftime when an unmarked Said Benrahma was picked out at the far post but he directed his header narrowly off target.

Everton sunk deeper in the second half to protect their lead and enjoyed a stroke of luck when Coufal’s powerful drive cannoned off the inside of the post and across goal where an off-balance Bowen somehow failed to convert the rebound.

As West Ham pushed on they were caught on the break and Calvert-Lewin played in Seamus Coleman who looked certain to score until Jesse Lingard made a superb block.

King then should have wrapped up the points for Everton but he headed against the post from close range.