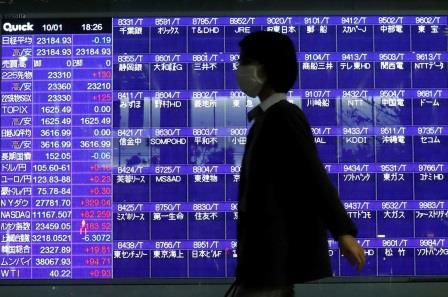 FILE PHOTO: A passerby wearing a protective mask is silhouetted in front of a screen of blank prices on a stock quotation board after Tokyo Stock Exchange temporarily suspended all trading due to system problems, amid the coronavirus disease (COVID-19) pandemic, in Tokyo, Japan October 1, 2020. REUTERS/Issei Kato

TOKYO (JAPAN): Stocks rose on Monday amid speculation that interest rates will remain low due to receding inflationary pressure, while oil and gas prices jumped after a cyber attack on a US pipeline operator unnerved markets.

Australian stocks hit their highest in more than a year, boosted by gains in miners, but shares in China fell 0.74%. Japanese shares gained 0.53%.

US nonfarm payrolls data on Friday showed jobs growth unexpectedly slowed in April, which gave equities a lift but put downward pressure on the dollar and U.S. Treasury yields.

Oil and gasoline futures extended gains after a cyber attack shut down a US pipeline operator that provides nearly half of the US east coast’s fuel supply.

“It certainly pushes back the timetable for Fed tapering, perhaps to December from the prior expectations of the Jackson Hole Symposium in late August,” Chris Weston, head of research at broker Pepperstone in Melbourne, wrote in a memo.

“A softer payrolls is good for the reflation trade; the dollar weakened across the FX spectrum. We’ve also seen a solid bid in equity indices and futures are up.”

On Friday the Dow Jones Industrial Average and the S&P 500 rose to record closing highs after disappointing data on the US jobs market eased concerns about a spike in consumer prices.

In recent weeks, some investors had been placing bets that a robust US economic recovery from the coronavirus pandemic would force the Federal Reserve to raise interest rates earlier than the central bank has outlined.

However, the weak nonfarm payrolls report caused a rapid reversal in some of these trades, which rippled through stocks, bonds, and major currencies.

The focus now shifts to US consumer price data due on Wednesday, which will help investors determine whether they need to scale back their inflation expectations even further.

The dollar index against a basket of six major currencies edged up to 90.237 but was still near its weakest since Feb. 25.

The British pound jumped to the highest in more than two months against the greenback, but worries about Scottish independence could curb sterling’s gains, traders said.

China’s onshore spot yuan strengthened to 6.4265 per dollar, the highest since Jan. 29.

The yield on benchmark 10-year Treasury notes steadied at 1.5931% in Asia on Monday after having plunged to a two-month low of 1.4690% on Friday.

Gasoline futures on the New York Mercantile Exchange rose 1.43% to $2.1574 a gallon, near a three-year high.

The White House is working closely with top US fuel pipeline operator Colonial Pipeline on Sunday to help it recover from a ransomware attack that forced the company to shut its main fuel lines.

“The major takeaway is the bad guys are very adept at finding new ways to penetrate infrastructure,” Andrew Lipow, president of Lipow Oil Associates told Reuters. “Infrastructure has not developed defences that can offset all the different ways that malware can infect one’s system.”