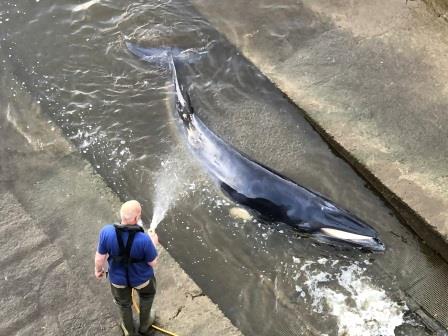 Rescue attempts are made as a small whale stranded in the River Thames is seen in this picture obtained from social media in London, Britain, May 9, 2021. DAVID KORSAKS @dkfitldn/via REUTERS

LONDON (UK): Rescuers workers rescued a small whale stranded in the River Thames in southwest London, according to reports.

The team of rescuers arrived at the scene near a lock in Richmond at around 21:00 BST (2000 GMT) shortly after the whale, believed to be a minke, was first noticed on Sunday evening, media reports said.

A small crowd of people gathered to watch as the team worked to remove the whale from the lock, hosing the animal down, and then putting a large yellow float around it, video footage obtained by Reuters showed.

Nearly four hours later the whale was successfully moved to a safer location, the BBC reported.

The minke whale, a species commonly found in the North Atlantic Ocean, will be assessed by a vet to ensure it is healthy enough to be released, according to the BBC