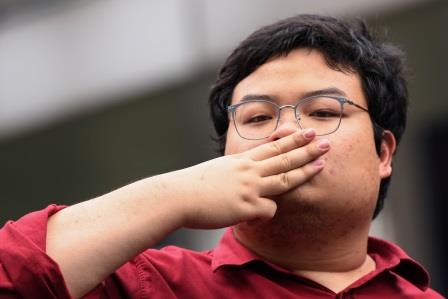 BANGKOK (THAILAND): Two leaders of anti-government protests who have spent weeks in pre-trial detention on charges of insulting the country’s king have been granted bail.

The court agreed to the release of Parit “Penguin” Chiwarak, 22, and Chaiamorn “Ammy” Kaewwiboonpan, 32, with conditions that they remain in Thailand, attend court hearings when summoned, refrain from damaging the monarchy and activities that create unrest, the court said in a statement.

The pair have been denied bail several times on charges related to protests last year, during which taboo-breaking calls were made for reform of the monarchy.

Chaiamorn is being prosecuted for lese majeste or insulting the monarchy, a crime punishable by up to 15 years in prison for each offence, and is accused of burning a portrait of the king in February.

Parit was hospitalised two weeks ago due to deteriorating health caused by 46 days of hunger strike. He is accused of various violations, including sedition and insulting the monarchy.

A bail hearing for another activist, Panupong “Mike” Jadnok, was postponed on Tuesday pending the result of a coronavirus test, the court said.

The student-led demonstrations made once-unthinkable calls for reforming Thailand’s monarchy, considered by many conservatives to be sacrosanct.

They also demanded the resignation of Prime Minister Prayuth Chan-ocha, a former army chief and staunch royalist who first came to power in a 2014 coup.

He stayed on as prime minister after a 2019 election, the rules of which his critics say were designed to ensure he remained in power. Prayuth says he was fairly elected.

Last week, another protest leader, Panusaya “Rung” Sithijirawattanakul, 22, was given bail after eight weeks in detention. She is also charged with lese majeste and took part in a hunger strike with Parit.

At least two more protest leaders including human rights lawyer Arnon Nampa and Chukiat “Justin” Saengowng remain in detention, where they have been infected with COVID-19.