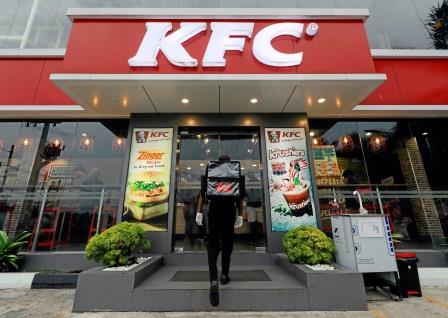 FILE PHOTO: A delivery staff member wearing a protective mask enters a KFC fast food outlet after a delivery, amid concerns about the spread of the coronavirus disease (COVID-19), in Colombo, Sri Lanka, July 9, 2020. REUTERS/Dinuka Liyanawatt

NEW YORK (US): More than half of 100 companies with the lowest median employee wages in the S&P 500 Index boosted CEO pay by changing the rules for assessing executive performance during the COVID-19 pandemic, according to a report by the Institute for Policy Studies, a left-leaning policy group.

The report found that 51 of these 100 companies, including beverage and snack maker Coca-Cola Co, cruise ship operator Carnival Corp and fast food corporation Yum Brands Inc, reduced median worker pay by 2% to $28,187 on average in 2020 compared to 2019, even as the median compensation for their CEOs rose 29% to $15.3 million.

The findings offer ammunition to investors opposing executive compensation hikes in non-binding votes held at the annual shareholder meetings of companies. More companies are facing shareholder backlash against their CEO pay this year than last, Reuters has reported.

A Carnival spokesman said in an email that CEO Arnold Donald received no cash bonus in 2020 and his total compensation in last year was down 29% versus 2019.

A Coke spokesperson referred comment to the company’s proxy statement, which notes that roughly 1,000 employees received special share awards, in addition to executives.

“We can’t rely on corporate boards to fix the problem of excessive CEO compensation,” Sarah Anderson, a co-author of the report, said in an interview. Anderson suggested in the report that companies with the highest CEO-to-average worker pay ratios should be taxed more.

The CEO-to-average worker pay ratio for the 51 companies in the report was 830-to-1.

The Yum Brands board authorized discretionary adjustments to bonus programs resulting in a $1.4 million bonus for CEO David Gibbs he otherwise would not have received, according to a securities filing. He also received a one-time stock award of $882,127, for a total 2020 compensation of $14.6 million, according to the filing.

The company’s board said the compensation boost was appropriate given that Gibbs and other executives helped stabilize the business and positioned it for success coming out of the pandemic.

In a prepared statement, Yum Brands said Gibbs gave up his base salary and used it to help fund one-time $1,000 bonuses for nearly 1,200 restaurant general managers. The company also awarded special bonuses to team members in company-owned restaurants globally.

Yum Brands identified a part-time worker at its fast food chicken chain KFC as its median employee, with a total compensation of $11,377, in the filing.