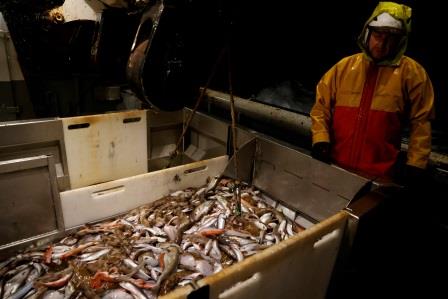 FILE PHOTO: A fisherman looks the fish tank aboard the Boulogne-sur-Mer based trawler "Nicolas Jeremy" in the North Sea, off the coast of northern France, December 8, 2020. REUTERS/Pascal Rossignol

“We’ve made a link between the two,” the source said.

The post-Brexit dispute over access to the UK’s rich fishing grounds last week saw France and Britain send patrol vessels to the Channel island of Jersey as a flotilla of French trawlers sailed there in protest.

A second source said Britain was failing to adhere to the terms of a deal governing its post-Brexit trade relations with the EU. There can be no progress on other dossiers if these are not resolved, the source, a European diplomat, added.

“It’s not just France and it’s not just fishing,” the European diplomat said. “Britain must fully apply the agreements it signed up to, which is not the case right now.”

Pre-Olympics camp in Japan cancelled by US athletics team