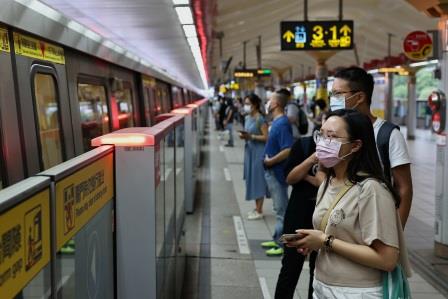 TAIPEI (Taiwan): Taiwan is set to raise its COVID-19 alert level in the “coming days” said Health Minister Chen Shih-chung, after warning of an extremely serious situation on the island. The announcement has sent the stock market crashing.

On Tuesday, Taiwan announced plans to restrict public gatherings as a result of a cluster of six new cases with no clear infection source, an unusual outbreak for the island that had kept a tight lid on community outbreaks.

Describing the situation as “very serious”, Chen told parliament the level could be lifted a notch to three, limiting gatherings to five people indoors and 10 outdoors, as well as closing of non-essential businesses.

“If there is the slightest failure in containment, then we will soon enter level three,” Chen said.

Later he told media a decision might come in “coming days”.

The government this week asked hospitals across Taiwan to allocate enough wards for potential new infections, Chen said, adding they are capable of providing 3,000 beds to treat patients.

President Tsai Ing-wen will hold a news conference on the coronavirus later on Wednesday, as will Chen.

The benchmark stock index fell more than 8% on worries over the new cases, though infections are still relatively few.

Yeason Jung, an analyst at Capital Futures in Taiwan, said the market was deeply unnerved by the possible upgrading of the COVID-19 alert status.

“If it’s raised to level three, a lot of businesses won’t be able to operate, and at level four classes and offices will be closed,” said Jung. “There are short-term panic selling pressures emerging.”

Taiwan largely closed its borders early in the pandemic and has a robust contact tracing and quarantine system, keeping infections to 1,210, including 12 deaths, and allowing life to stay close to normal.