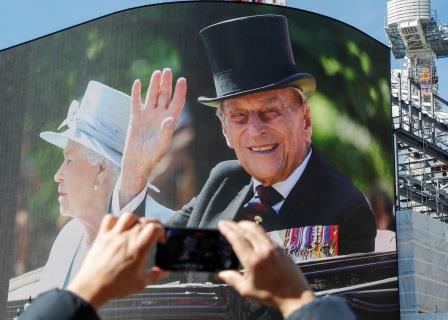 FILE PHOTO: A screen in Piccadilly Circus displays images of Britain's Prince Philip, husband of Queen Elizabeth, who died at the age of 99, in London, Britain, April 17, 2021. REUTERS/Paul Childs

The stamps, which will be available from June 24, feature black and white photographs of the royal, officially known as the Duke of Edinburgh, over the years.

The images show Philip at different ages wearing a suit, sporting a bowler hat, and dressed in naval uniform.

Philip, who died on April 9 aged 99, was married to Queen Elizabeth for more than seven decades and stood beside her throughout her 69-year reign.