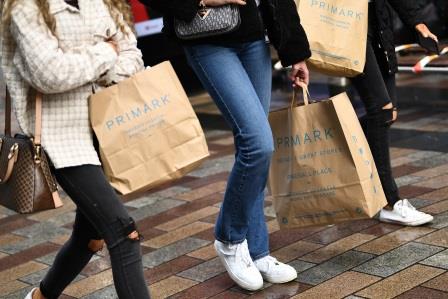 The British Retail Consortium said total sales were 7.3% higher in April than in the same month two years ago.

The BRC said comparisons with April 2019 gave a better sense of trends in the sector than its usual year-on-year sales measure which showed a jump of more than 50%, reflecting how the retail sector was largely shut in April 2020.

Furniture sales, which have risen due to increased home-working and booming residential property sales, were also up.

“However, this sales growth is fragile,” Dickinson said. “There is little competition for share of spending while parts of hospitality, leisure, and tourism remain restricted and inner cities and town centres continue to perform poorly as many people continue to work from home.”

Separate figures from payment processor Barclaycard showed debit and card spending last month was 0.4% higher than April 2019, the first growth this year by that measure.

Spending on essential items rose 10.1%, the strongest growth since August last year, pushed up by an 18.5% jump in supermarket shopping.

Resorts and accommodation saw growth of 1.6% as many people considered taking their summer holidays in Britain while airlines and travel agents reported declines of more than 80% with foreign trips largely prohibited.

Spending on fuel showed a smaller decline as more people travelled to see friends and family.

Barclaycard was unable to provide comparisons with spending in April last year.

Barclaycard’s measure of consumer confidence in the economy rose to 36% in April from 28% in March, its highest since February 2020 which was shortly before the onset of the pandemic, echoing the latest GfK survey on consumer confidence.

The consumer confidence survey was based on interviews with 2,000 people between April 24-26.