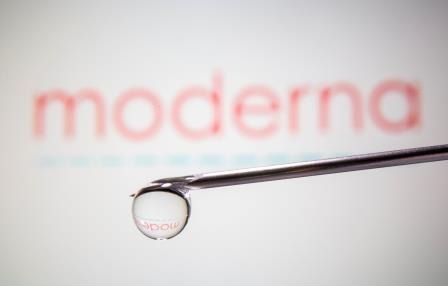 Australia, which on Wednesday agreed to buy 25 million doses of Moderna’s COVID-19 vaccine, has pledged to spend A$1.5 billion ($1.2 billion) to revitalise manufacturing across six sectors, including pharmaceuticals.

The move to put manufacturing at the centre of a long-term recovery plan comes amid a realization that Australia has been too reliant on Asia for the supply of essential goods. Sour relations with top trading partner, China, and the pandemic’s impact on global supply chains have also strengthened that view.

“Onshore manufacturing would ensure a secure, long-term supply of Moderna’s mRNA-based vaccines against COVID-19, including variants, and for potential future pandemics,” Morrison said in a statement.

MRNA vaccines prompt the body to make a protein that is part of the virus, triggering an immune response.

Minister for Health Greg Hunt said Moderna was one of several companies Australia was in talks with over domestic production.

“Our hope is that we will have at least one, if not more than one, manufacturing operation in Australia,” Hunt told reporters in Canberra.

“I am confident that over the future period, we will have mRNA production in Australia.

Citing delays in securing supplies, Australia now expects to finish inoculating its near 26 million population by the end of the year.

But this timetable relies on deliveries of vaccines from Pfizer after Australia in April restricted the use of AstraZeneca’s vaccine in people below 50 years due to rare blood-clotting cases.

Australia has administered about 2.5 million doses of the AstraZeneca vaccine, with 18 people believed to have developed the condition.

Moderna will supply Australia with 10 million shots designed to protect against the original strain of the coronavirus this year, and 15 million doses of its updated variant booster shot in 2022.

Australia has fared much better than many other developed countries in keeping its COVID-19 numbers relatively low, with just over 29,900 cases and 910 deaths.