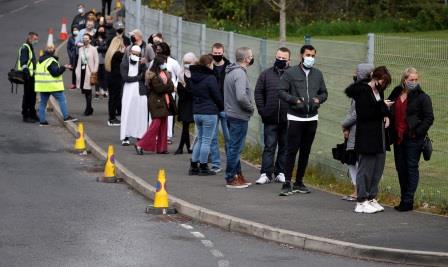 FILE PHOTO: People line up outside a mobile vaccination centre, amid the outbreak of the coronavirus disease (COVID-19), in Bolton, Britain, May 13, 2021. REUTERS/Phil Noble

LONDON (UK): Vaccine rollout to be accelerated in areas where a highly infectious coronavirus variant first detected in India has emerged. The move is meant to prevent a planned economic reopening from derailing.

The UK has delivered one of the world’s fastest inoculation campaigns, giving a first shot to almost 70% of the adult population and a second to 36%, helping to reduce infection rates and deaths.

But the emergence of the highly infectious B.1.617.2 variant in parts of northern England and London has threatened a planned full reopening due to take place in June, prompting a rethink on ways to speed up the vaccination drive.

The next stage of relaxation of restrictions, where people will be formally permitted to hug again, meet in small groups indoors and travel internationally, is taking place on Monday.

While shots are now available nationally to anyone over the age of 38, vaccines minister Nadhim Zahawi said that in areas where the Indian variant of concern has been found they could be offered to younger people in multi-generational households.

Those receiving the Pfizer vaccine could also have the second dose more quickly, to boost protection, and surge testing will be used whereby all residents of a certain area are asked to get a PCR test to help assess how widespread the problem is.

“We will flex the vaccination deployment wherever possible to deal with this new variant,” Zahawi said. “It is clearly more infectious because infections have gone up in a week from 520 to 1,313.”

Public Health England a week ago labelled the mutation a “variant of concern,” citing evidence that it spreads more quickly than the original version of the virus and could spread at least as quickly as the so-called “Kent” variant, which fuelled England’s second wave of infections.

Britain put India on a travel “red list” in April, meaning all arrivals from the South Asian country – now suffering the world’s worst wave of COVID-19 – would have to pay to quarantine in a government-approved hotel for 10 days.

Media reports at the time suggested that, because the quarantine requirement was announced four days in advance, many people sought to fly beforehand between the two countries, which have close cultural ties.

To help tackle the new variant, the Times newspaper said, the government was now considering bringing forward second doses for the most vulnerable groups from around the current 12-week gap if Britain does endure a third wave of infections.

Prime Minister Boris Johnson has set out what he describes as a “cautious but irreversible” route out of lockdown for England, with the next step planned for next week.

Even with new variants, the government is likely to want to avoid pursuing a regional approach to curbs after it ultimately failed last year, leading to two further national lockdowns.

RR Owner says there is a Slim chance of completing IPL in the UK, Middle East