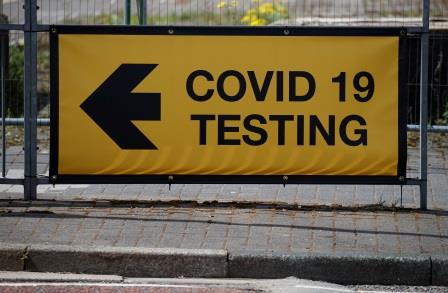 FILE PHOTO: A sign directing people to a testing station, amid the outbreak of the coronavirus disease (COVID-19) in Bolton, Britain, May 16, 2021. REUTERS/Phil Noble

LONDON (UK): A leading British epidemiologist said that the transmissibility advantage of the B.1.617.2 variant first identified in India might be a little lower than first feared, but vaccines might be less effective at limiting its spread.

Prime Minister Boris Johnson on Friday warned that the emergence of the variant might derail his plans to lift England’s lockdown fully on June 21.

Johnson said that if the variant was only marginally more transmissible than the dominant Kent variant, then easing could continue as planned, but a significant transmissibility advantage might force him to reconsider the plans.

“There’s… a glimmer of hope from the recent data that, whilst this variant does still appear to have a significant growth advantage, the magnitude of that advantage seems to have dropped a little bit with the most recent data,” Neil Ferguson, an epidemiologist at Imperial College London, told BBC radio.

Ferguson, who is member of the government’s Scientific Advisory Group for Emergencies (SAGE), said that it was tricky to immediately determine by how much how the B.1.617.2 outcompetes the Kent variant, and more data was needed.

He said the initial rapid growth of B.1.617.2 had been among people who had travelled and who had a higher chance of living in multi-generational households or in deprived areas, and the speedy transmission might not be replicated in other settings.

Ferguson added that though there was a “good deal of confidence” that vaccines will protect against severe disease from the variant, B.1.617.2 might be able to spread more easily among vaccinated people.

“There’s some hints in the data there’s reduced vaccine efficacy against infection, against transmission,” he said. “But we really have to wait as more data is gathered to be definitive about that.”