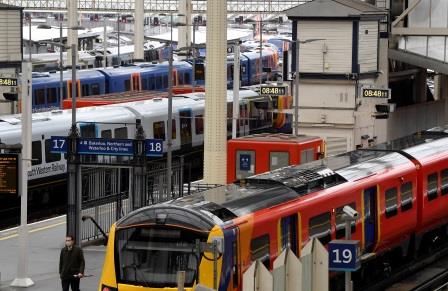 FILE PHOTO: A man walks on a platform at Waterloo railway station during the morning rush hour as coronavirus disease (COVID-19) restrictions continue to ease throughout the country, London, Britain, May 19, 2021. REUTERS/Toby Melville

LONDON (UK): In the biggest reform of the railway network in a quarter of a century Britain will create the ‘Great British Railways’. Though there will be no return to the notoriously “terrible sandwiches” of the old British Rail.

After the privatisation of British Rail from 1994-1997, the rail sector was fragmented into a bewildering array of different companies, fares and bosses – sometimes leaving passengers angry at poor service and blunders over timetables.

“For too long passengers have not had the level of service they deserve,” Prime Minister Boris Johnson said in a statement.

Johnson’s government said passengers had been let down by the current structure which offered an array of confusing tickets and that it was often impossible to identify who was to blame for poor service.

“I want the ticketing to be straightforward and simple and we won’t be going back to the days of British Rail with terrible sandwiches and all the rest of it,” he said.

The new Great British Railways will own and maintain rail infrastructure, collect and set fares and contract private companies to run the trains.

FirstGroup said on Thursday that it had agreed new two-year contracts with the government for its South Western Railway and TransPennine Express train companies.

“We have long called for this transition to a new contract structure with a far better balance of risk and reward,” FirstGroup Chief Executive Matthew Gregory said.

Under the contract, the government takes all revenue risk and retains cost risk up to agreed levels. There is a performance fee based on operational performance, customer satisfaction, finance and business management.