Indonesia’s troop aims to ‘wipe out’ armed rebels in Papua 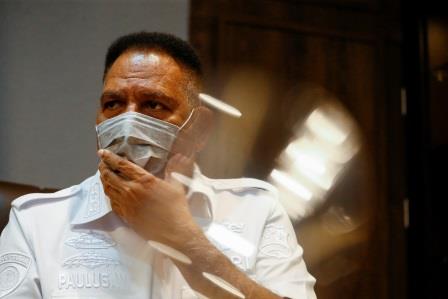 Paulus Waterpauw, head of the National Police Intelligence and Security Agency, gestures as he talks during an interview at his office in Jakarta, Indonesia, April 29, 2021. REUTERS/Ajeng Dinar Ulfiana

JAKARTA (Indonesia): A new security crackdown on armed separatists in the central highlands of Indonesia’s restive Papua region will be maintained until they are wiped out, the country’s police intelligence chief said.

Amid a worsening conflict, some 400 extra troops have been deployed to Papua following the assassination of a senior intelligence official there and the designation of separatists as “terrorists” by the Indonesian government last month.

Paulus Waterpauw, an indigenous Papuan and head of Indonesian police intelligence, made the strongest remarks yet about the resolve of Indonesian authorities to suppress the decades-long armed separatist rebellion in resource-rich Papua.

“The objective is to wipe out those behind these horrible acts of violence,” he said. “This operation will go on until we get the maximum result. As long as they have not been arrested, we will do our utmost to incapacitate them and catch them.”

Waterpauw cited the killing of 19 road workers in December 2018, the destruction of schools and health clinics, and attacks on civilians as some of the “brutal recent events” that had prompted the troop surge.

Sebby Sambom, a spokesman for the Free Papua Organisation, the main separatist group in Papua, said there were “reasonable reasons” behind the group’s attacks.

“The military and police targeting will not succeed,” he added. “Every year there will be new fighters. They will increase, not decrease.”

Papuan separatists say their struggle is legitimate because former colonial power the Netherlands promised the region it could become independent before it was annexed by Indonesia in 1963.

Indonesia says Papua is its territory after a 1969 vote supervised by the United Nations backed Papua’s integration. Separatists say that vote, which involved about 1,025 people, did not reflect their aspirations.

Waterpauw told media the new taskforce set up to tackle violence in Papua – known as Operation Nemangkawi – had two prongs. The pursuit and arrest of armed separatists and a “soft approach” – community development and increased consultations with religious and community groups.

Waterpauw said there had been 26 attacks by armed separatists this year, including three on Tuesday.

Two soldiers were ambushed and had their weapons confiscated by armed separatists and “were chopped up and mutilated and killed”, he said. In the two other incidents on Tuesday, five soldiers were wounded.

Human rights monitors and analysts said there had been abuses by both sides.

“We are continuing to receive credible reports of excessive use of force by the military and police, including extrajudicial killings, harassment, arbitrary arrests and detention of indigenous Papuans,” Ravina Shamdasani, a spokeswoman for the U.N. High Commissioner for Human Rights, told last month.

The Indonesian government also has launched a new campaign to prosecute allegedly corrupt officials in Papua accused of siphoning off some of the 1,092 trillion rupiah ($76 billion)of funds sent to the region by the central government since 2001.

This “huge” amount of government funding had not led to major improvements in the welfare of Papuans, which remain among the most poverty-stricken in Indonesia, he said.

“In handling the perpetrators suspected of misappropriating state finances, some regional heads or their staff will be investigated and processed,” he said.

He said the police anti-terrorism unit, known as Detachment 88, had not yet been deployed to Papua. The “terrorist” designation applied to separatists will help authorities uncover their funding, he added.

“We invite dialogue with the political and clandestine group,” he said.