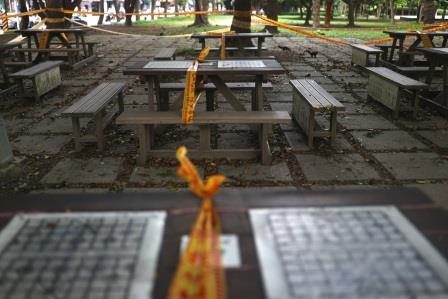 A public park is closed following the recent rise in coronavirus disease (COVID-19) infections in Taipei, Taiwan May 21, 2021. REUTERS/Ann Wang

TAIPEI (Taiwan): A Taiwanese official accused China on Saturday of spreading fake news about the COVID-19 situation on the island, saying this was why the government was publicising and refuting instances of false information that have been circulating online.

After months of keeping the pandemic under control, Taiwan is dealing with a surge in domestic infections, and the whole island is under a heightened state of alert with people asked to stay at home and many venues shut.

Taiwan has repeatedly warned that China, which claims the democratically governed island as its own, is trying to use “cognitive warfare” to try and undermine trust in the government and its response to the pandemic.

Speaking to reporters, Deputy Minister of the Interior Chen Tsung-yen said they had “clearly felt” the danger represented by Chinese propaganda and misinformation against Taiwan.

“The reason we are continuing to explain the contents of the fake information to everyone is to call attention to it. We must immediately intercept this, and not let cognitive warfare affect Taiwan’s society,” he added.

Chen listed examples of what he said was fake news circulating online, including that Taiwan President Tsai Ing-wen had been infected and it was being covered up.

“I want to say to everyone that this is really vile fake news,” he said.

Tsai tested negative this week after a worker at her residence was confirmed to be infected.

A security official watching Chinese activity in Taiwan told Reuters this week the Taipei government believed Beijing was engaged in cognitive warfare to “create chaos” and undermine public trust in how the pandemic is being handled.

China’s Taiwan Affairs Office, in a statement to Reuters on Thursday, said Taiwan’s accusations were “imaginary”, and that the government was trying to draw attention away from real problems.

Taiwan should “stop playing political games, and take practical measures to control the pandemic as soon as possible”, it added.

Taiwan says this weekend is critical to breaking the chain of transmission, and has urged people to stay at home.

The health ministry brought out its social media dog mascot, a shiba inu called Zongchai, to suggest songs about being alone people could sing at home to keep themselves entertained, like Taiwanese rocker Wu Bai’s hit “Lonely Tree, Lonely Bird”.

“At the weekend, don’t go out unless absolutely necessary,” the ministry said, showing Zongchai wearing glasses in front of a microphone.