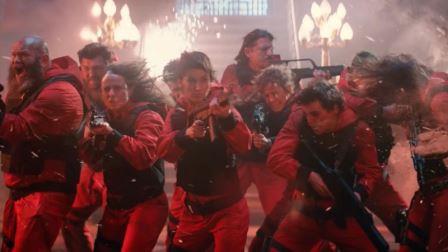 Looks like the world’s favourite professor and his gang of red jumpsuit wearing criminals are back for one last tango! La casa del papel otherwise popularly known as Money Heist will be hitting Netflix with it’s fifth season. The season 5 trailer, packed with more fire power and even more drama, looks promising.

Over the course of four seasons the stylish criminals successfully pulled off two major bank heists. The heist of the  Royal Mint of Spain during the first two seasons, was a cliffhanger and absolute thrill to sit through. The criminals, all of whom are named after cities, follow the well laid plans of Sergio ‘The Professor’.The plans, however, are not without its flaws when the police try to track down the professor and crack into the team of seasoned, but hot headed criminals. Season 4 ended as the group freed the character Raquel aka Lisbon from jail.

In an absolutely dramatic trailer Netflix brings the final act of the series in two parts. The crew is no stranger to pressure and the new trailer gives us just that. Seems like the stakes are high this time. But they have one thing on their mind, avenging the death of Nairobi aka Agata. The trailer has a voice over by the short-fused Tokyo aka Silen Oliveira. It starts off with a character crushing the famed Dali mask. Probably indicating that this time they might not hide under any disguise.

The trailer shows a number of favourites who will be returning to the final act such as Aníbal aka Río, Daniel aka Denver,  Mónica aka Stockholm, Mirko aka Helsinki and Arturo. Ofcourse, one can only wait to find out who will finally make it out alive this time. With Netflix announcing that this would be the last season some major twists and heart wrenching loss is expected.

Season 5 is split up in two volumes. Volume 1 will be released on September 3, followed by  Volume 2 on December 3.