Bomb threat cited by Belarus was sent after plane was diverted 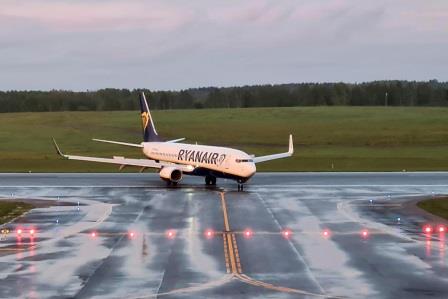 FILE PHOTO: A Ryanair aircraft, which was carrying Belarusian opposition blogger and activist Roman Protasevich and diverted to Belarus, where authorities detained him, lands at Vilnius Airport in Vilnius, Lithuania May 23, 2021. REUTERS/Andrius Sytas

WASHINGTON (US): A bomb threat cited by Belarusian authorities as the reason for forcing a Ryanair jetliner carrying a dissident journalist to land in Minsk was sent after the plane was diverted, privacy-focused email provider Proton Technologies AG said on Thursday.

The Belarusian authorities said they ordered the plane, which was in Belarusian airspace on its way from Greece to Lithuania, to land in the Belarusian capital on Sunday because of a bomb threat from the Islamist militant group Hamas.

Journalist Roman Protasevich and his girlfriend Sofia Sapega were arrested when the plane landed.

Hamas denied having any knowledge or connection to any bomb threat, and European leaders have accused Belarus of stat-sponsored piracy.

On Wednesday, the London-based research group Dossier Center published what it said was an email carrying the purported Hamas threat. The email was sent 24 minutes after the Belarusian authorities warned the plane’s crew there was a bomb threat, it showed.

The email’s timing was first reported by the Daily Beast and Newlines magazine.

Proton declined to comment on specifics of the message but confirmed it was sent after the plane was diverted.

“We haven’t seen credible evidence that the Belarusian claims are true,” the Swiss company said in a statement. “We will support European authorities in their investigations upon receiving a legal request.”

European leaders are drawing up new sanctions against Belarus over Sunday’s incident.