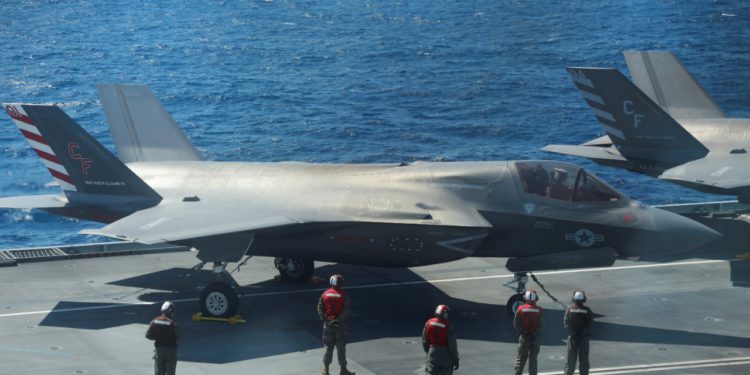 CASCAIS (PORTUGAL) – The first voyage of a new British aircraft carrier will aim to show allies that post-Brexit Britain is ready to protect Western interests. It is eager to see China respect international rules, the vessel’s commander said.

HMS Queen Elizabeth took part in NATO exercises in the Mediterranean this week, ahead of the eight-month voyage that will cross through the South China Sea in a signal to Beijing that sea lanes must remain open.

The carrier is “a hugely powerful statement,” Commodore Steve Moorhouse, the ship’s commanding officer and captain told Reuters on deck off the Portuguese coast as F-35B fighter jets took off around him.

“It shows that we are a global navy and wanting to be back out there,” he said. “The aim for us is that this deployment will be part of a more persistent presence for the United Kingdom in that region,” he added, referring to the Indo-Pacific that includes India and Australia.

Britain was the main battlefield ally of the United States in Iraq and Afghanistan and, alongside France, the principal military power in the European Union. But its 2016 vote to leave the EU had raised questions about its global role.

Partly in response to those concerns, London announced its biggest military spending increase since the Cold War late last year and has been touting the clout of the carrier, built at a cost of more than 3 billion pounds ($4.26 billion).

HMS Queen Elizabeth will exercise with naval vessels from the United States, Singapore, Japan, and South Korea, along the route, Moorhouse said on Thursday.

It will lead two destroyers, two frigates, a submarine and two support ships on its journey of 26,000 nautical miles, joined by a U.S. destroyer and a frigate from the Dutch navy.

Asked about British efforts to step up influence in the Indo-Pacific region to counter China’s rising power – a strategy also followed by the European Union and supported by NATO – Moorhouse said: “We want to uphold international norms … our presence out there is absolutely key.”

China claims 90% of the potentially energy-rich South China Sea, but Brunei, Malaysia, the Philippines, Taiwan and Vietnam also lay claim to parts of it.

The United States has long opposed China’s expansive territorial claims there, sending warships regularly through the waterway to demonstrate freedom of navigation. About $3 trillion worth of trade passes through it each year.

In the Mediterranean, the British carrier group is part of NATO’s biggest drills of the year, Steadfast Defender, that includes a maritime live exercise with around 5,000 forces and 18 ships.

“It sends a message of NATO’s resolve,” NATO Secretary-General Jens Stoltenberg said onboard the aircraft carrier.

“We face global threats and challenges, including the shifting balance of power with the rise of China,” he said, adding that although China had the world’s biggest navy, it was not considered an adversary by NATO.

Germany apologises for its role in colonial-era genocide in Namibia