US and India united in tackling COVID-19: Blinken 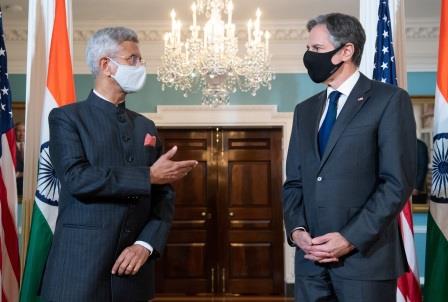 U.S. Secretary of State Antony Blinken (R) and Indian External Affairs Minister Subrahmanyam Jaishankar speak to the media prior a meeting at the State Department in Washington, DC, U.S. May 28, 2021. Saul Loeb/Pool via REUTERS

WASHINGTON (US): United States and India are united in trying to tackle the pandemic together and Washington is determined to help India with its coronavirus COVID crisis, said Secretary of State Antony Blinken said on Friday the

Indian Foreign Minister Subrahmanyam Jaishankar, who has spent the past week in the United States seeking help amid a devastating second wave of infections at home, told reporters while standing with Blinken at a State Department meeting that India is grateful to Washington for strong support and solidarity.

“In the earlier days of COVID, India was there for the United States – something we will never forget,” Blinken said. “And now we want to make sure that we’re there for India as well.”

Blinken said the partnership between the two countries is “vital,” “strong” and “increasingly productive.”

He said the two countries were also united in addressing climate change, and were partnered together directly through the Quad – a four country group that also includes Japan and Australia – and through U.N. institutions “in dealing with many of the challenges we face in the region and around the world.”

India, the world’s second most-populous country, this month has recorded its highest COVID-19 death toll since the pandemic began last year. Only about 3% of India’s 1.3 billion people have been fully vaccinated, the lowest rate among the 10 countries with the most cases.

Prime Minister Narendra Modi’s government has faced mounting criticism for its failure to secure COVID-19 vaccines for its people, even though India is one of the world’s biggest producers of vaccines. Indian officials have said Jaishankar has been seeking supplies while in the United States.

Jaishankar said India was appreciative to Washington for its “strong support and solidarity at a moment of great difficulty for us.”

U.S. Acting Assistant Secretary for South Asia Dean Thompson later told a briefing hosted by the State Department’s Foreign Press Center that vaccine manufacturing, procurement and delivery were discussed with Jaishankar, but declined to give details.

He said final decisions were still pending as to where up to 80 million vaccine doses President Joe Biden has promised to send abroad would go.

He said the assistance had included redirecting a U.S. order of critical vaccine manufacturing supplies that would allow India to make over 20 million additional doses of the AstraZeneca COVID-19 vaccine.

Jaishankar met with U.N. Secretary-General Antonio Guterres in New York on Tuesday. Guterres’ spokesman said they had a “very good discussion” on “COVID‑19, the issue of vaccines and also a number of other peace and security issues in general.”

U.S.-India ties have grown closer in recent years amid shared concerns about China’s rise and they have increased cooperation through the Quad.

U.S. President Joe Biden’s Indo-Pacific policy coordinator, Kurt Campbell, said on Wednesday that the United States is looking to convene an in-person summit of leaders of the Quad in the fall, with a focus on infrastructure.

The Quad held a first virtual summit in March and pledged to work closely on COVID-19 vaccines, climate and security.