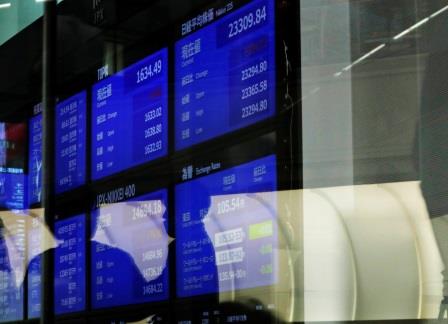 FILE PHOTO: People are reflected on a glass in front of a large screen showing stock prices at the Tokyo Stock Exchange after market opens in Tokyo, Japan October 2, 2020. REUTERS/Kim Kyung-Hoon

SINGAPORE: Asian equity markets hit a one-month peak on Tuesday, buoyed by the global stock rally, while gold flirted with five-month highs ahead of European and U.S. data this week that will likely offer clues on the health of the world economy.

European stocks were set for a mixed start, with Euro Stoxx 50 futures up 0.3%, while FTSE futures gave up 0.4%.

MSCI’s broadest index of Asia-Pacific shares outside Japan edged up 0.4%, hitting the highest in a month and taking total gains made so far this year to nearly 7%. World equities have risen for a fourth straight month as ample liquidity supported risk taking despite worries about higher inflation.

In Asia, Taiwan’s and South Korea’s indexes notched gains, making up for selling it Japanese, Australian and Chinese markets. South Korea stocks rose as data showed the country’s exports logged their sharpest expansion in 32 years in May. That contrasted with Japanese data that showed companies cutting spending on plant and equipment for the fourth straight quarter. [L2N2NJ009] China’s factory activity expanded at the fastest pace this year in May as domestic and export demand picked up, a business survey showed.

While asset markets have rallied last month, policymakers are focused on tackling inflation at a time when the underlying structural economy has been struggling to gain traction. Markets are also awaiting signals from the Federal Reserve on when it will start tapering its bond-buying programme. “The fixation of the markets now is on inflation and rightly so because of so much of quantitative easing and supply chain disruptions,” said Hou Wey Fook, chief investment officer at DBS Bank.

“It seems to be that tapering should be on the cards. But it will be mild, it’ll be slow and will be very well communicated.” This week’s main event is the U.S. payrolls on Friday with median forecasts at 650,000, but the outcome is uncertain following April’s unexpectedly weak 266,000 gain. Though U.S. inflation data last week was above estimates, another big miss on the jobs front would delay prospects for any wind down of stimulus, analysts say. The dollar languished near multi-month lows versus major peers as traders looked for clues on Fed direction. [USD/]

“The world economy is clearly recovering, and that is going to be bad for the U.S. dollar because it’s a counter-cyclical currency,” said Commonwealth Bank of Australia strategist Joseph Capurso. “The U.S. dollar has been pretty heavy in the last few weeks, and I think it keeps trending lower.” The Australian dollar strengthened as much as 0.5% as Australia’s current account surplus hit a record high and drove upward revisions to economists’ growth forecasts.

But the Aussie later retreated after the central bank left its policy unchanged and stuck with a dovish tone.

The offshore Chinese yuan was steady at 6.3739 per dollar, pulling back from a three-year high of 6.3526 per dollar reached on Monday, after the monetary authority tightened banks’ foreign exchange requirements to stem the currency’s rise. Concerns about global inflation have supported gold, with prices for the yellow metal rising 8% this month, vaulting comfortably above $1,900. On Tuesday, gold prices traded near a five-month high scaled last week. [GOL/] Oil prices rose ahead of an OPEC+ meeting and on optimism that fuel demand will grow in the months ahead with the summer driving season starting in the United States, the world’s top oil consumer. [O/R] Brent crude futures for August added 1.2% to $70.1 a barrel, while U.S. crude rose 1.9% to $67.6.