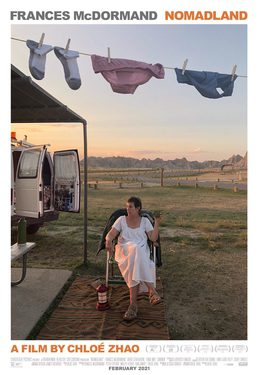 Every once in a while a movie comes out that quietly stirs the insides of a moviegoer. It puts them at the centre of their own thought process and makes them delve deeper into their own understanding of loneliness and freedom of the self.  Nomadland is one such movie. An American drama adapted from the book ‘Nomadland: Surviving America in the Twenty-First Century’ by Jessica Bruder, which is based on the lives of older Americans who adopted the transient lifestyle travelling around the country during the Great Recession between 2007 to 2009.

The movie first premiered in 2020 at the Venice Film Festival and took home the prestigious Golden Lion award and had been the front runner for the Oscars 2021 with six nominations and, eventually taking home the Academy Award for Best Director, Best Picture and Best Actress Awards.

Francis Mcdormand plays Fern, who loses her job when the company she worked with for years shut down. Fern, who lost her husband recently, decides to sell her belongings, purchases a van and decides to travel around the country, sometimes doing odd jobs or taking up a position as seasonal worker in Amazon. While for a young movie goer the prospect of not being bogged down by capitalism and the idea of a nomadic lifestyle might seem interesting, for those who have crossed their retirement age, this story might seem overwhelmingly frightening or for some it may seem like a liberation they are in search of. Fern meets like minded people, who chose the nomadic way of life, some of her age some older. She hustles, at times tired, at times broken. But she never stops.

The movie was written, edited, produced, and directed by Chloé Zhao dogs deep into emotions, relations, loneliness and liberation in a way only few other movies have done before. Francis McDormand once again shines as Fern, in one her most striking performances. She quite literally lived on the screen. Her accolades for this performance was well deserved.

Cinematography Joshua James Richards moves with the wind, the snow and the rain taking us through Fern’s ever moving world and raw emotions. Ludovico Einaudi’s music as always was on point, painful, stirring and happy in her lone journey, just like Fern.

Nomadland is currently streaming on Netflix.