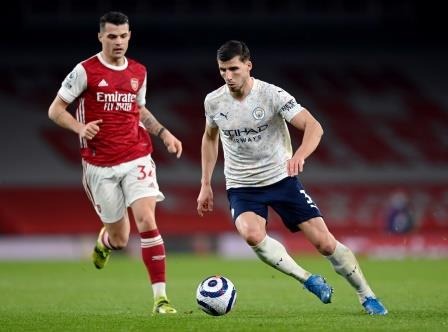 City boss Pep Guardiola was named Manager of the Season for a third time.

Centre back Dias was named England’s Footballer of the Year in the annual vote of the Football Writers’ Association last month following a superb debut campaign after his move from Benfica last year.

Dias played a key role in delivering City’s third Premier League title in four years as well as the League Cup, and helped his side the Champions League final.

The 24-year-old was also named in the Professional Footballers’ Association (PFA) Team of the Year.

Dias is the fourth defender to be voted Player of the Season by the public, the captains of the 20 Premier League clubs and a panel of experts after Manchester United’s Nemanja Vidic, former City captain Vincent Kompany and Liverpool’s Virgil van Dijk.

His compatriot and former Manchester United forward Ronaldo won the award in 2006-07 and 2007-08.

Under the Spaniard, City conceded the fewest goals (32) this season and kept clean sheets in half of their games (19) to finish 12 points clear of second-placed United.