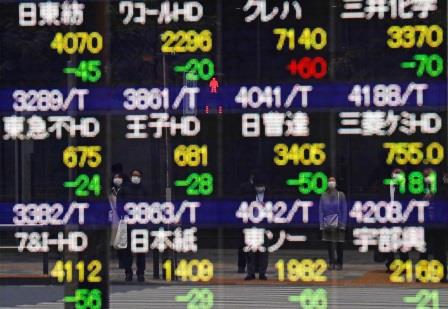 FILE PHOTO: Pedestrians and a traffic light stop sign are reflected on a quotation board in Tokyo, Japan February 26, 2021. REUTERS/Kim Kyung-Hoon

HONG KONG: Asia stocks reversed early gains on Tuesday, with traders sidelined ahead of U.S. inflation data and a European monetary policy meeting this week while oil prices lost more ground on worries over the fragile state of the global recovery.

E-mini futures for the S&P 500 index were up 0.07%, while FTSE futures were flat, pointing to a subdued start for European markets.

Kyle Rodda, market analyst at IG, said there was a lack of catalysts for markets as investors were waiting on the sidelines for meaningful news and data points.

“It’s been quiet. The primary concern of the market is inflation and central banks,” he said. “… Overall we are seeing negative sentiments regarding risk assets.”

The European Central Bank holds its policy meeting on Thursday, the same day the U.S. consumer price index figure is due, potentially fuelling talk of tapering by the Federal Reserve. In Asia, China inflation data is due on Wednesday.

“The start of a new week has not seen much by way of price action across all asset classes,” said Ray Attrill, head of FX Strategy at National Australia Bank.

“It’s hard to avoid the sense the global markets are for the most part now simply lurching from one big event risk to the next with not a lot to see in-between,” he said.

Australia’s S&P/ASX 200 was the only major index remaining in positive territory, trading up 0.18%.

MSCI’s All-Country World Index advanced 0.1% on Monday, hitting its sixth record close in seven days, after the G7 nations reached a landmark deal on Saturday to back a minimum global corporate tax rate of at least 15%.

The deal lifted shares of technology giants such as Microsoft and Facebook as their future tax obligations become more predictable.

Oil prices lost more ground on Tuesday as concerns about the fragile state of the global recovery were heightened by data showing China’s oil imports fell in May.

The dollar index rose 0.1% against its rivals, making gold more expensive for other currency holders.

China's wild elephants on the move after day of rest