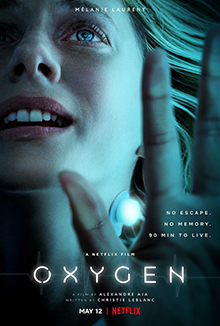 As a world that is surviving through a pandemic, the overriding emotion that most humans are experiencing is nothing short of a sci-fi thriller. During such a situation, sci-fi movies are all too relatable. Directed by Alexandre Aja, who is most known for helming horror genres such as the popular Hills Have Eyes and Mirrors, French sci-fi, psychological survival movie ‘Oxygen’ is  that relatable movie, so much so that you could almost feel yourself living and quite literally gasping with the protagonist.

Indulging too much into ‘Oxygen’ would mean letting out some of the key spoilers. However, in a nutshell, the movie revolves around the character, Elizabeth Hansen, played by the charismatic Mélanie Laurent, who wakes up in a cryogenic unit,and realises that she is trapped in it with no memory of her past or even her own name. Elizabeth is guided by an AI ‘M.I.L.O’, that has limitations, but still assists her, all the while refusing to open the unit.  Elizabeth’s struggle as she fights to regain her memory and get in touch with the world outside the cryogenic unit is the core of the plot.

The movie viewing experience is hampered by ‘at home viewing’ due to closure of movie theatres. It certainly would have been, quite the nail biter, had it been viewed on a big screen with booming background score of the cinema hall. That said, the movie is still an uneasy, nail biting thriller that offers us twists after twists. The movie does feel like a drag, at certain points, but gets back on track. The performance is on point and the cinematography too does not fail to take the audience with the protagonist on a claustrophobic ride. Those with serious claustrophobia can give this a miss, it is sure to be triggered otherwise. For those who love a good, sci-fi thriller, give this a shot.

At 101 minutes, Oxygen is currently streaming on Netflix.

US bill on Chinese tech threat opposed by China’s parliament

US bill on Chinese tech threat opposed by China's parliament