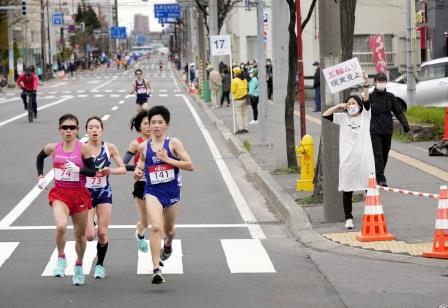 FILE PHOTO: A spectator raises a paper sign reading 'It is impossible to hold the Olympics, face up to reality' along the race route during the half-marathon as part of Hokkaido-Sapporo Marathon Festival 2021, a testing event for the Tokyo 2020 Olympics marathon race, amid the coronavirus disease (COVID-19) pandemic, in Sapporo, Hokkaido Prefecture, Japan May 5, 2021, in this photo released by Kyodo. Kyodo/via REUTERS/File Photo

TOKYO (Japan): When Olympics organisers shifted the marathon event from Tokyo to the northern city of Sapporo, they did so because of concerns about the intense summer heat in the Japanese capital. Sapporo is currently under a COVID-19 state of emergency amid a resurgence in coronavirus infections.

Two years down the track, critics say organisers have effectively leapt from the frying pan into the fire.

Officials in the city say they still don’t have key information, including the number of athletes to expect and details on health facilities, while opposition from residents to hosting part of the world’s biggest multi-sporting event has grown.

“There’s no action yet,” said Takashi Okugi, a Sapporo city official in charge of Olympic preparations. “We don’t have enough time.”

With less than two months to go, Hokkaido, the northernmost island where Sapporo is the main city, has the second-highest per capita COVID-19 rate in Japan, about 43% higher than that of Tokyo. Sapporo, which has a population of just under 2 million people, accounts for almost two-thirds of new cases.

Both city officials and residents are nervous about the huge influx of athletes and support staff at a time the city’s medical system is already stretched.

Okugi said officials have made repeated requests to the Tokyo 2020 Organising Committee, seeking essential details on issues including which hospitals would be designated to treat any infected participants.

“So far a lot of answers that we are hearing are like no decision yet or still under consideration,” Okugi said. “Without a clear structure, we can’t figure out yet how much the city’s medical system can be affected so we want information from the organising committee quickly.”

The Tokyo 2020 Organising Committee did not immediately comment. Top Japanese government officials and Olympic organisers have pledged to hold a “safe and secure” Games by implementing strict coronavirus measures.

Sapporo early last month hosted a half marathon as a test event for the upcoming games. All participants, including six international athletes, had to log their temperature and answer a health questionnaire daily in the week leading up to the event.

With infections already on the rise in the city, organisers urged spectators not to come and watch the test race. Staff wore masks and sometimes face shields and plastic gloves.

World Athletics chief Sebastian Coe gave the test event high marks, saying organisers were able to deliver both on the operation of the race and on their COVID-19 countermeasures.

Organisers have already decided not to let in international spectators for the Games, but have yet to announce whether local spectators would be allowed to attend.

Okugi said that uncertainty meant no plans had yet been made to accommodate spectators in Sapporo, which is also scheduled to host soccer matches and race-walk events during the Games in July and August.

Many locals, who welcomed the Winter Olympics in 1972, are less keen on their summer cousin under the current circumstances.

More than a dozen civic groups in Hokkaido prefecture this week submitted a petition to demand the governor cancel all events scheduled to take place in the city.

“There’s not enough hospital beds. Hokkaido’s medical system is already collapsing,” said Masamichi Nishio, a doctor and honorary director of Hokkaido Cancer Center, one of those representing the campaign.

Takako Ishido, a Hokkaido prefecture official working on Olympics planning, said she agreed with petition organizers that the safety of residents was the priority. Ishido said it was difficult to assess infection risks without an estimate of likely visitors to the city and called for more detailed information from Games organisers.

Nishio said many Sapporo residents with serious illnesses were unable to receive prompt treatment because hospital rooms were filled with COVID-19 cases.

“Why should we have Olympics here? Who will be responsible for people who die from coronavirus after the Olympics?” he said. “The government doesn’t care about our lives.”