Olympics: Tokyo Games should be held without spectators: JOC executive 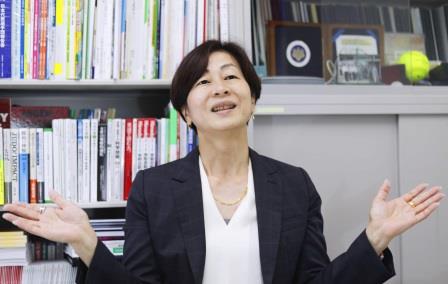 FILE PHOTO: Kaori Yamaguchi, a member of the Japanese Olympic Committee's Executive Board, gives an interview in Tokyo, Japan May 19, 2021, in this photo taken by Kyodo. Picture taken May 19, 2021. Kyodo/via REUTERS

TOKYO (Japan): One of Japan’s sporting legends and an executive of the Japanese Olympic Committee (JOC), Kaori Yamaguchi, said on Friday the Tokyo Games should be held without spectators to ensure the safety of the public. She went on to accuse the organisers of using a “double standard”.

Yamaguchi, an Olympic judo medallist, said the government was “confusing” the people by asking them to stay at home and imposing curbs while putting on the global sports showpiece.

Polls have shown most Japanese oppose holding the Games this year, worried about a slow vaccination rollout and the flood of athletes and officials from overseas. Japan has effectively been closed to foreign visitors since the pandemic broke out.

“There’s this fear inside everyone that if people start moving around Japan again, the infections would spread right at the time when they have peaked out and people can live safe lives again,” said Yamaguchi, one of the few lone voices openly critical of the Olympics in the world of Japanese sports.

“If we were to limit the virus and be careful about it, I’d say we should hold the Games without spectators,” Yamaguchi said.

Already postponed from last year because of the pandemic, a scaled-down version of the Games with no foreign spectators is set to start on July 23 despite public fears it could drain medical resources and spread the coronavirus as Japan appears to have contained the fourth wave of infections.

The decision on the domestic spectators — and whether to lift the state of emergency in Tokyo and several other areas — is expected later this month.

The government’s most senior medical adviser, Shigeru Omi, has been voicing his concerns in parliament over the last week, warning that the biggest risk was the increased movement of the public, which has contributed to past rises in infections.

Despite the opposition, the Japanese government and the organisers have dug in their heels, saying the Games would go ahead “barring Armageddon”, as one International Olympic Committee (IOC) member put it.

Yamaguchi, who won a bronze medal at the 1988 Seoul Games, has expressed her dismay at such pronouncements, adding she thought the organisers “avoided dialogue” and that the IOC “seems to think that public opinion in Japan is not important.”

During the interview, she also accused Prime Minister Yoshihide Suga and Olympics Minister Tamayo Marukawa of “not sufficiently explaining” to people why they should think the Games are “safe and secure”.

“Even though the infections have eased, they ask people to be careful, to not drink alcohol, to not go out, but they also say: ‘enjoy the Olympics’ — so the citizens are confused by this double standard,” said Yamaguchi.

Japan has recorded more than 760,000 COVID-19 cases and more than 13,800 deaths, while only 12% of its population has received at least one vaccination shot — far behind other major economies.

Yamaguchi added that the appropriate message the organisers should be sending to the public right now was: “we’re not getting carried away”.

“I’m not saying people shouldn’t have fun, but I want them to have this stance: we still haven’t won with corona, we’re still in danger.

“It’s the same as in sports: the most dangerous moment is when you think you’ve won. Typically, that’s when you get beaten up.”