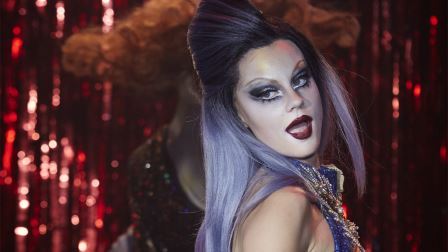 Dance films are not new, and it has often been a widely liked genre with Step-up leading the scene. Dancing Queen too treads the same path.

Dancing Queen is a popular song by ABBA, adding more meaning to this Swedish flick. The story revolves around Dylan Pettersson, who lives on a small island in Sweden with dreams of making it big as a dancer. At just 23, she is trying to cope with the loss of her mother, tries to support her father in his small-time store and at times attempts to emotional support him as well. Dylan finds strength in her grandmother and her mothers dance studio, where she also takes dance classes for local kids. After her grandmother talks her into participating in a dance audition, she accidently discovers a drag club in the city. While she misses the audition, Dylan finds a job as a cleaner in the club and finds out that it is struggling. She decides to help them out, but being a girl means no entry into a drag show. The story moves forward as Dylan figures out ways to be part of the club, and tries to find herself as well.

While the story sounds quite different and exciting to on paper, it more or less takes the same path as any other dance movies that has came out before. The only difference being the drag queen premise that it is set in. This could’ve been a slightly more heartwarming had the movies heart been in the right place. It was hard to connect with any of the characters in the movie, despite the loss and the depression each of them were trying to overcome. The protagonist seemed out of place most of the time and despite this being a dance movie, there was very little dancing through out. The camera would tactfully not show the audience and entire proper dance routine, almost suggesting that the lead actor might not actually know any dancing. Not all ‘Dance Movie’ genres need to be approached the same way, this one had all the possibilities of exploring how this genre shouldn’t stick to clichés.

At 110 minutes, Dancing Queen is yet another Netflix mind number, with nothing to take home, except maybe a bit of the refreshing scenic Swedish islands.

Large incursion of plane near Taiwan, China says must respond to ‘collusion’

Large incursion of plane near Taiwan, China says must respond to 'collusion'