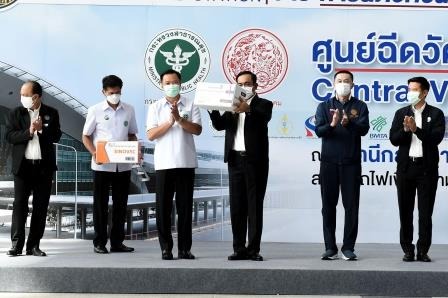 BANGKOK (THAILAND) – Thailand’s prime minister expressed apology and took responsibility on Tuesday for coronavirus vaccination delays, while thousands of private companies and public organisations were speeding their way to secure doses imported by a royal-backed academy.

Prime Minister Prayuth Chan-ocha said holdups were caused by supply and distribution issues, after some hospitals in Bangkok were forced to postpone scheduled inoculations this week.

“I apologise for the problem and would like to take full responsibility for solving it,” Prayuth told reporters.

“We will try to manage this better going forward.”

So far 4.76 million of Thailand’s more than 66 million people have received at least one dose of a COVID-19 vaccine.

Thailand’s strategy relies heavily on a local firm owned by its king, which is making the AstraZeneca vaccine for distribution in Southeast Asia, but has had to delay and downsize some deliveries.

Thailand has been scrambling to procure more vaccines and diversify brands in recent months.

Nearly 7,000 organisations, including private firms and provincial organisations, are seeking “alternative vaccines” from an academy chaired by the king’s youngest sister, Princess Chulabhorn, the academy said.

It last week said 1 million doses of Sinopharm’s vaccine should be available from June 20.

Opas Karnkawinpong of the Department of Disease Control said he expected 6.5 million doses of coronavirus vaccine would be distributed this month in total, of which 3.5 million had already been delivered.