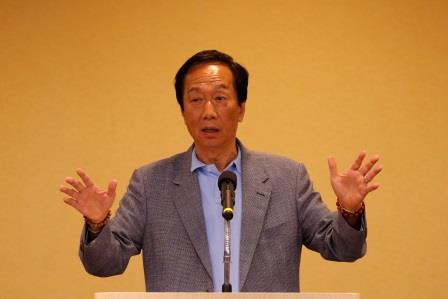 Foxconn Technology Group founder and chairman, Terry Gou, speaks during a news conference after his trip to the U.S., in Taipei, Taiwan May 6, 2019. REUTERS/Tyrone Siu

TAIPEI (Taiwan) -Taiwan will allow Terry Gou, the billionaire founder of Taiwan’s Foxconn, and TSMC to negotiate on the government’s behalf for COVID-19 vaccines, a spokesman said on Friday, but warned he couldn’t guarantee success.

Taiwan is trying to speed up the arrival of the millions of vaccines it has on order as it deals with a spike in domestic cases, although infections remain comparatively low. Only around 6% of Taiwan’s 23.5 million people have received at least one of the two-shot coronavirus vaccine regimen.

The government has come under pressure to allow private firms to buy vaccines, and said while it welcomes the idea and is willing to help, they have to provide proof from vaccine producers they have shots and are willing to sell them.

Lo said BioNTech had told Gou, who wants to make the purchase through his Yonglin Education Foundation, on Wednesday they will only sell vaccines to governments.

“A good method is for the government to, under this framework, authorise TSMC and the Yonglin Education Foundation to buy them and then donate to the government,” he said.

He said the government was, with the help of the German government, continuing its own talks with BioNTech, adding there was no guarantee Gou or anyone else would succeed.

“Even if Mr. Gou can discuss this with the original manufacturer or an agent, can he get them to sell sufficient vaccines? Honestly, nobody knows.”

Earlier on Friday, Gou said he wanted to meet Tsai to discuss the proposal and that he had “absolutely no political or commercial intentions in this matter”.

TSMC said it “confirmed the initiative”, but offered no other details.

The presidential office said Tsai would meet Gou and TSMC Chairman Mark Liu later on Friday to discuss their proposals.

Taiwan’s own deal with BioNTech fell through this year, with the government blaming it on pressure from Beijing.

China has denied the accusation, saying Taiwan is free to obtain the vaccines through Shanghai Fosun Pharmaceutical Group Co Ltd, which has a contract with BioNTech to sell the vaccines in China, Hong Kong, Macau and Taiwan.

Taiwan has been dealing directly with BioNTech in Germany, saying it does not trust vaccines from China.

Health Minister Chen Shih-chung told reporters the government “of course” hoped the vaccines would come from and be produced in Germany.

“I think that at the moment people would have more confidence in this.”

Gou’s spokesperson Amanda Liu told reporters that Gou had held talks with “all partners” on the vaccine purchase idea, and had proposed signing a deal with Fosun’s Swiss or Hong Kong branches to avoid political problems.

Japan donated 1.24 million AstraZeneca Plc shots to Taiwan this month and the United States has pledged 750,000 doses, although it has not given details, all on top of vaccines Taiwan has already ordered.

Another 240,000 Moderna Inc doses will arrive in Taiwan later on Friday.