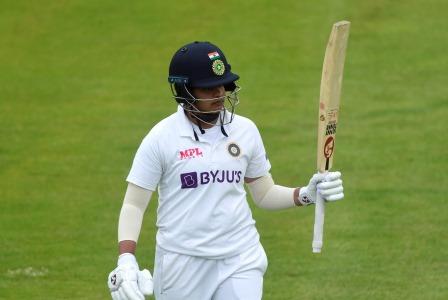 LONDON (UK) – After the teenage opener’s fairytale test debut in England, Shafali Verma has been hailed as a rare talent of India women’s cricket team by captain Mithali Raj. She described Verma as one who can dominate all three formats of the game.

Seventeen-year-old Verma scored 96 and 63 on her test debut in Bristol, winning the player-of-the-match award and also becoming the first woman cricketer to hit three sixes in a test match.

“I think Verma is a player who comes across once in a generation,” Raj said after India pulled off a thrilling draw on Saturday while following on. I’m sure from here on, she’ll go from strength to strength and will be very, very important to the batting of the Indian team in all formats. She beautifully adapted to this format. She didn’t go like how she would go bonkers in the T20 format,” Mithali added.

Known for her swashbuckling batting, Verma showed the other side of her game in the second innings with a restrained display that largely contributed to saving India from defeat.

Verma’s six-hitting ability has earned her a stint with the Birmingham Phoenix at The Hundred competition in England from next month.

Former test player W.V. Raman, whose stint as India women’s team coach ended last month, said Verma could have a major impact on women’s cricket. “We may see her doing in women’s cricket what Viv Richards did from the 70s to 90s,” Raman tweeted referring to the West Indies batting great.

Verma said she wanted to grow into an all-format player. “I was so disappointed (to miss the century). I just want to be a good cricketer for my side, that’s it,” she said.