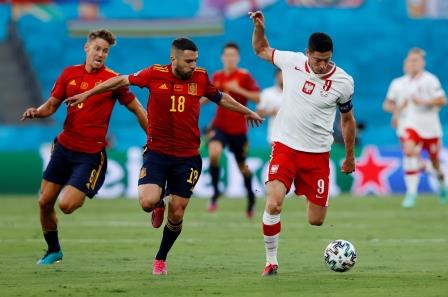 SEVILLE(SPAIN)- Spain manager Luis Enrique is happy watching his team’s laboured progress so far at Euro 2020, which is also becoming a feat of endurance for the country’s soccer fans.

Saturday’s 1-1 draw with Poland, just like their opening 0-0 stalemate with Sweden, showed up a worrying lack of spontaneity in a Spain side that appears more concerned with not giving the ball away than actually risking doing anything creative with it.

As against Sweden when they attempted 917 passes and enjoyed 85% possession — the highest numbers seen at a European Championship since 1980 — they dominated the ball against Poland, but had little to show for their toil.

With Villarreal’s striker Gerard Moreno, scorer of 30 goal for his club last season, added to the starting lineup, Spain initially looked as though they had more cutting edge.

It was Moreno’s shot that was turned in by Alvaro Morata in the 25th minute to give Spain the lead and Moreno should have added a second goal before halftime.

Spain were rocked by Robert Lewandowski’s towering headed equaliser in the 54th minute but were given an immediate chance to reclaim the lead, only for Moreno to smack a penalty against the post and Morata to make a hash of the rebound.

After that Spain looked timid in attack and ran out of ideas — and their frustrated fans in Seville could only hark back to the days when the wizardry of the likes of Xavi, Andres Iniesta and David Silva could be relied upon to unlock defences.

On current evidence this Spain team cannot even be relied upon to escape Group E. With two points they are third behind leaders Sweden (four points) and Slovakia (three).

If they fail to find some inspiration for their clash with Slovakia next week and do not win, Spain’s first ‘home’ tournament since the 1982 World Cup faces an ignominious end.

It is the first time since 1996 that Spain have failed to win at least one of their opening two games at a Euros.

And make no mistake, having watched Spain’s two games so far, Slovakia will not be quaking in their boots.

“We are not seeing the Spain we are used to, where is the physicality or leadership, like a Carles Puyol, Andres Iniesta, Xavi, when things went wrong they stepped it up,” former Germany striker Juergen Klinsmann, summarising for the BBC, said.

“Now when it goes wrong, they are looking at each other and pushing away the responsibility — like the penalty.”

Luis Enrique has options in the squad such as Liverpool’s Thiago and Paris St Germain’s Pablo Sarabia and jet-heeled winger Adama Traore, who has not played a minute so far, but he is a stubborn individual and is unlikely to change the system.

But the coach clearly expects more from his players.

“I thought we’d be able to impose ourselves more — but we couldn’t,” he said. “A result often covers up flaws in a performance. When the result isn’t positive, it calls for even closer analysis. It hasn’t left us with the best feeling.”