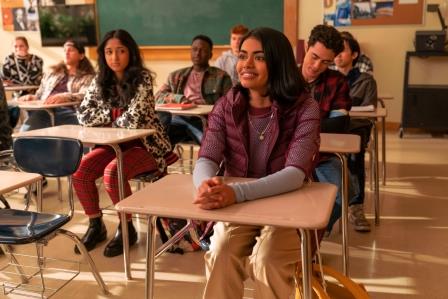 NEVER HAVE I EVER (L to R) MAITREYI RAMAKRISHNAN as DEVI VISHWAKUMAR, MEGAN SURI as ANEESA, and, DARREN BARNET as PAXTON-HALL YOSHIDA in episode 204 of NEVER HAVE I EVER Cr. ISABELLA B. VOSMIKOVA/NETFLIX © 2021

It is once again time for young puppy love and high school crushes. Mindy Kaling’s coming-of-age comedy series ‘Never Have I Ever’ Season 2 is all set to hit Netflix on July 15.

Indian American teenager Devi played by Maitreyi Ramakrishnan still revolves around a never ending saga of drama in her school as well as from her mom. This time she is determined to have an American boyfriend. Who is she going to pick this time? Is it Paxton or Ben? But here comes the twist, what is a good high school drama without some competition and teenage angst? The trailer shows a new entrant into the scene, who according to Devi is a “prettier and cooler Indian girl”.

Canadian actor Maitreyi, the biggest success story from the series, is preparing to star in her first film. The rom-com ‘The Netherfiled Girls’, is described as a fresh take on Pride and Prejudice. Maitreyi will play protagonist Lizzie Bennet, who eventually discovers the man she thinks is Mr. Wrong, who is in fact Mr. Right.

‘Never Have I Ever’ is created and executive produced by Kaling along with Lang Fisher serving as co-creator, executive producer, and writer. The first season of the show was Kaling’s first attempt at creating a series for an OTT platform. The series was a massive success, even receiving praise from critics.