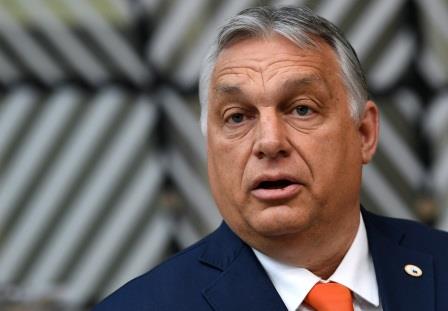 Hungary's Prime Minister Viktor Orban addresses the media as he arrives on the first day of the European Union summit at The European Council Building in Brussels, Belgium June 24, 2021. John Thys/Pool via REUTERS

BRUSSELS (Hungary) – Hungarian Prime Minister Viktor Orban defended his country’s law to ban the dissemination of material in schools deemed to promote homosexuality or gender change, and declared himself a fighter for LGBT rights.

“I am a fighter for their rights. I am a freedom fighter in the communist regime. Homosexuality was punished and I fought for their freedom and their rights. So I am defending the rights of the homosexual guys, but this law is not about that,” Orban told reporters on arrival for a meeting of EU leaders, who are expected to raise the law that many EU capitals have criticised.

“It’s not about homosexuals. The law is about to decide what kind of way parents would like to sexually educate the kids, (this) exclusively belonging to the parents. That’s what the law is about,” Orban said, adding he had no plans to repeal it.

Summit chairman Charles Michel said separately in arriving to the talks that the 27 national EU leaders will have a debate about the contentious new Hungarian law on Thursday evening.