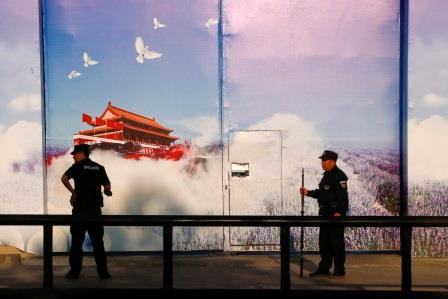 A human rights group that attracted millions of views on YouTube to testimonies from people who say their families have disappeared in China’s Xinjiang region is moving its videos to little-known service Odysee after some were taken down by the Google-owned streaming giant, two sources told a prominent media agency

The group, credited by international organizations like Human Rights Watch for drawing attention to human rights violations in Xinjiang, has come under fire from Kazakh authorities since its founding in 2017.

Serikzhan Bilash, a Xinjiang-born Kazakh activist who co-founded the channel and has been arrested multiple times for his activism, said government advisors told him five years ago to stop using the word “genocide” to describe the situation in Xinjiang – an order he assumed came from pressure from China’s government on Kazakhstan.

“They’re just facts,” Bilash said to media agency in a phone interview, referring to the content of Atajurt’s videos. “The people giving the testimonies are talking about their loved ones.”

Atajurt Kazakh Human Rights’ channel has published nearly 11,000 videos on YouTube totaling over 120 million views since 2017, thousands of which feature people speaking to camera about relatives they say have disappeared without a trace in China’s Xinjiang region, where UN experts and rights groups estimate over a million people have been detained in recent years.

On June 15, the channel was blocked for violating YouTube’s guidelines, according to a screenshot seen by media, after twelve of its videos had been reported for breaching its ‘cyberbullying and harassment’ policy.

The channel’s administrators had appealed the blocking of all twelve videos between April and June, with some reinstated – but YouTube did not provide an explanation as to why others were kept out of public view, the administrators told media.

Following inquiries from prominent media agency as to why the channel was removed, YouTube restored it, explaining that it had received multiple so-called ‘strikes’ for videos which contained people holding up ID cards to prove they were related to the missing, violating a YouTube policy which prohibits personally identifiable information from appearing in its content. They reinstated the channel on June 18 but asked Atajurt to blur the IDs.

Atajurt is hesitant to comply, the channel’s administrator said, concerned that doing so would jeopardize the trustworthiness of the videos. Fearing further blocking by YouTube, they decided to back up content to Odysee, a website built on a blockchain protocol called LBRY, designed to give creators more control. About 975 videos have been moved so far.

Even as administrators were moving content, they received another series of automated messages from YouTube stating that the videos in question had been removed from public view, this time because of concerns that they may promote violent criminal organizations.

“There is another excuse every day. I never trusted YouTube,” Serikzhan Bilash, one of Atajurt’s founders, told media in a phone interview. “But we’re not afraid anymore, because we are backing ourselves up with LBRY. The most important thing is our material’s safety.”

Bilash, who fled to Istanbul last year after suffering repeated threats and intimidation from Kazakh authorities when he refused to stop working with Atajurt, said his equipment including hard disks and mobile phones had been confiscated multiple times in Kazakhstan – making YouTube the only place where their entire video collection was stored.

YouTube said the messages relating to promoting violent criminal organisations were automated and not related to the creator’s content, but the videos were being kept private to allow administrators to make edits.

‘I FELT I’D LOST EVERYTHING’

U.N. experts and rights groups estimate over a million people, mainly Uighurs and other Muslim minorities, have been detained in a vast system of camps in Xinjiang. Many former inmates have said they were subject to ideological training and abuse in the camps. China denies all accusations of abuse.

YouTube in recent years has restricted more content amid increasing scrutiny on online cyberbullying, misinformation and hate speech. The policies have ensnared many channels, including those of far-right commentators, forcing them to seek haven on social media services such as Parler that tout more openness.

But Atajurt representatives fear pro-China groups who deny that human rights abuses exist in Xinjiang are using YouTube’s reporting features to remove their content by reporting it en masse, triggering an automatic block. Representatives shared videos on WhatsApp and Telegram with a news agency which they said described how to report Atajurt’s YouTube videos.

They also pointed to multiple YouTube channels containing videos of Serikzhan Bilash’s face superimposed onto animals like monkeys and pigs which they said were denigrating Bilash’s character and work.

YouTube said channels are always welcome to move to alternatives. Its policies bar directing abusive attention by posting non-public personal information, such as names and addresses.

The service makes exceptions to some rules for videos that are educational, documentary or scientific – but Atajurt’s videos did not meet these requirements to a sufficient level, according to YouTube.

“We welcome responsible efforts to document important human rights cases around the world,” the company said. “We recognize that the intention of these videos was not to maliciously reveal PII … and are working with Atajurt Kazakh to explain our policies.”

Odysee told media that it welcomes and supports Atajurt.

Atajurt plans to keep uploading to YouTube as long as it can.

“We will never delete it,” Bilash said, citing the importance of the service’s big audience.

“The day YouTube deactivated our channel, I felt I’d lost everything in the world… the new channel does not have so many subscribers,” he said, “but it is safe.”