“Afghans are going to have to decide their future,” says Biden as withdrawal nears end 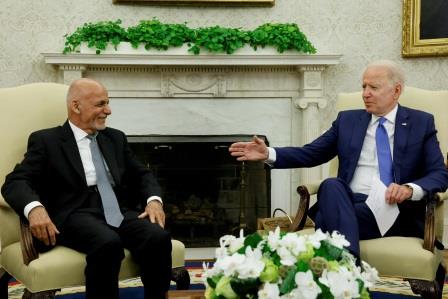 WASHINGTON (US): US President Joe Biden met Afghan President Ashraf Ghani and his former political foe, Abdullah Abdullah, on Friday at the White House where he called on Afghans to decide the future of their country as the last US troops pack up after 20 years of war and government forces struggle to repel Taliban advances.

Biden, seated beside Ghani and Abdullah in the Oval Office, called them “two old friends” and said US support for Afghanistan was not ending but would be sustained despite the US pullout.

“Afghans are going to have to decide their future, what they want,” said Biden, saying the “senseless violence has to stop.”

Ghani said Afghan security forces had retaken six districts on Friday. He said he respected Biden’s decision and that the partnership between the United States and Afghanistan is entering a new phase.

“We are determined to have unity, coherence,” he said.

Speaking with reporters after the meeting, Ghani said the United States’ decision to withdraw troops was a sovereign one and it was Kabul’s job to “manage consequences.”

He added that Biden had clearly articulated that the US embassy would continue to operate and security aid would continue and in some cases move on an accelerated schedule.

Abdullah said in a Reuters interview after the Biden meeting that stalled intra-Afghan talks on a political settlement to decades of strife should not be abandoned unless the insurgents themselves pull out.

“I think we shouldn’t shut the door unless it’s completely shut by the Taliban,” Abdullah said. “We can’t say no to talks despite a lack of progress or in spite of what’s happening on the ground.”

The Oval Office meeting could be as valuable to Ghani for its symbolism as for any new US help because it will be seen as affirming Biden’s support for the beleaguered Afghan leader as he confronts Taliban gains, bombings and assassinations, a surge in COVID-19 cases and political infighting in Kabul.

“At a time when morale is incredibly shaky and things are going downhill, anything one can do to help shore up morale and shore up the government is worth doing,” said Ronald Neumann, a former US ambassador to Kabul. “Inviting Ghani here is a pretty strong sign that we’re backing him.”

Biden’s embrace, however, comes only months after US officials were pressuring Ghani to step aside for a transitional government under a draft political accord that they floated in a failed gambit to break a stalemate in peace talks.

Biden has asked Congress to approve $3.3 billion in security assistance for Afghanistan next year and is sending 3 million doses of vaccines there to help it battle COVID-19.

US officials have been clear that Biden will not halt the American pullout – likely to be completed in the coming weeks -and he is unlikely to approve any US military support to Kabul to halt the Taliban’s advances beyond advice, intelligence, and aircraft maintenance.

Earlier, the Afghan leaders met for a second day on Capitol Hill, where Biden’s withdrawal decision met objections from many members of both parties.

US House of Representatives Speaker Nancy Pelosi, welcoming Ghani to a bipartisan leadership meeting, said she looked forward to hearing about what more can be done with US humanitarian aid, especially for women and girls.

Many lawmakers and experts have expressed deep concerns that the Taliban – if returned to power – will reverse progress made on the rights of women and girls, who were harshly repressed and barred from education and work during the insurgents’ 1996-2001 rule.

The Ghani-Abdullah visit comes with the peace process stalled and violence raging as Afghan security forces fight to stem a Taliban spring offensive that threatens several provincial capitals and has triggered mobilizations of ethnic militias to reinforce government troops.

US Secretary of State Antony Blinken, speaking during a visit on Friday to Paris, said Washington is “looking very hard” at whether the Taliban are “serious about a peaceful resolution to the conflict.”

The crisis has fueled grave concerns that the Taliban could regain power – two decades after the US-led invasion ended their harsh version of Islamist rule – allowing a resurgence of al Qaeda. US and US officials say the extremists maintain close links with the Taliban.

US officials respond that the United States will be able to detect and thwart any new threats by al Qaeda or other Islamists. The Taliban insist al Qaeda is no longer in Afghanistan.

US government sources familiar with US intelligence reporting describe the situation as dire. Ghani, they said, has been urged to do more to step up pressure on the insurgents while US-led coalition forces are still there.