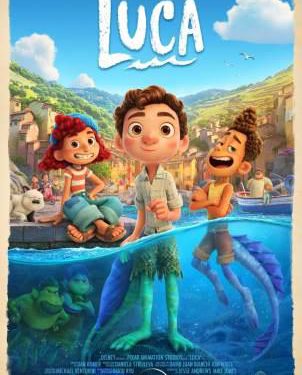 The one lingering thought while watching Disney Pixar’s new animated movie ‘Luca’ is, ‘if only one could watch this on the big screen’. Sigh! To be able to watch new movies in between a pandemic itself has become a blessing, and to be able to relish a heartwarming movie such as Luca, was quite unexpected. People have come to expect Disney to come out with a run-of-the-mill animated movie with predictable themes. While it does look like a number of feel-good versions of Disney animated movies released earlier, Luca stands out in a way only Disney Pixar movies could.

Luca is set on the sun-kissed Italian Riviera, where Luca Paguro learns that he belongs both to the ocean and the land. The young lad who has always been curious about life on the surface of the sea is accidentally able to discover the wonders of the land and its land monsters, all thanks to his new friend Alberto Scorfano. Alberto has already learnt to survive both on land and under the ocean and Luca is struck by the ease with which Alberto masters the ways of both the world. Both the young boys are equally fascinated by the photograph of a Vespa scooter and are trying to find ways to get hold of one to explore the world. The story revolves around Luca and his friend and how both of them navigate a world that is not exactly happy about welcoming ‘sea creatures’ among them.

It does not take one to know rocket science to put together what the movie is trying to convey. It’s a simple story where boys with a secret meet the world and decides to open up to that world and its people, hoping that they are allowed to be a part of it. There! Disney has finally done it. Told with a kind of exquisiteness, one might only come across in Hayao Miyazaki’s stories; Luca is a humble tale of exploration and acceptance. In fact, the design and animation were inspired by hand-drawn and stop motion works and Hayao Miyazaki’s style.
There are times when one would clearly be able to relate to Luca, the kid who is struggling to find his heart. Expect yourself to silently wipe away a tear or two, as you smile from ear to ear, before the end credits roll. This movie would warm any pandemic-hit, cold, lonely heart.

So here is the Asian Herald verdict: Luca is clearly a feel-good watch, it offers more than what is shown. Maybe watch it again, if you need to make sure what you saw was exactly what you thought. Your take away is a lesson on love, friendship and belonging
At 95 minutes running time, the movie is available on Hotstar.