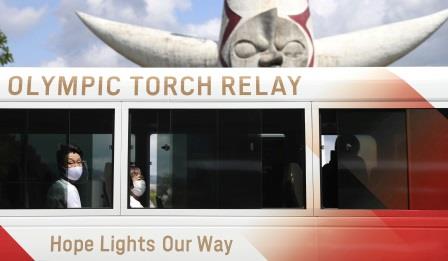 FILE PHOTO: Tokyo 2020 Olympic Torch Relay runners wearing protective masks wait inside a bus for their run at the Expo '70 Commemorative Park, without spectators and instead of on public roads due to the coronavirus disease (COVID-19) outbreak, in Osaka, western Japan April 14, 2021, in this photo released by Kyodo. Kyodo/via REUTERS ATTENTION EDITORS

TOKYO (Japan): Authorities are likely to move the first eight days of the Tokyo leg of the Olympic torch relay off public roads due to concerns about the spread of the coronavirus, the Kyodo news agency reported on Tuesday.

The traditional torch relay was due to reach the capital on July 9, passing mostly through outer suburbs and islands before parading through the centre of the city from July 17 until the Games opening ceremony on July 23.

However, with much of the host city under a quasi-state of emergency until July 11 and concerns persisting about a rise in infections thereafter, Kyodo said officials were likely to change plans for the first half of the Tokyo leg.

The report did not specify the likely alternative for the first eight days. In other areas where coronavirus restrictions have affected the relay, organisers have held static events with no spectators.

A Tokyo Metropolitan Government official said a panel was looking into the matter.

Japan has not suffered the explosive outbreak of the coronavirus seen elsewhere but has only recently emerged from a fourth wave of infections. A decline in the pace of new cases and a pick-up in the vaccination rollout prompted authorities to ease a state of emergency in Tokyo and eight other prefectures on June 20.

However, with the delayed Olympics looming, experts are worried about a renewed rise in cases in Tokyo and the spread of more highly transmissible variants. The Games also faces resistance from a substantial portion of the public.

“The number of infections nationwide is on a declining trend, settling down,” Economy Minister Yasutoshi Nishimura told a news conference on Tuesday.

He added, however, that infection rates remained “somewhat high” in the capital of Tokyo and some other areas.