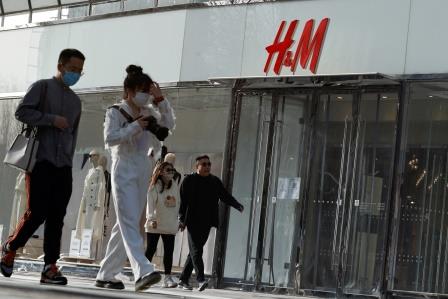 STOCKHOLM (SWEDEN) – Highlighting a patchy recovery from the pandemic as restrictions ease and stores reopen, Fashion retailer H&M’s global sales growth slowed in the second half of June.

The world’s second largest fashion retailer, on Thursday reported a stronger than expected second-quarter profit, but said sales for June 1-28 were down 4% compared to 2019, indicating that sales slowed throughout the month.

Chief Executive Helena Helmersson, speaking to analysts and reporters, attributed the June easing of sales to a combination of factors, including tough year-ago and 2019 comparisons, cold weather in some European markets last week, and how coronavirus restrictions are being eased.

H&M had said previously that sales for the first two weeks of June were higher than in 2019.

Analysts said the figures implied that sales were down 9% on 2019 in the latter two weeks of June, although they noted that rival Primark had also highlighted that trading was very volatile from week to week at the moment.

In China, local-currency sales were down 23% in the company’s second quarter after H&M was wiped off Tmall and domestic phonemakers’ app stores in March amid a backlash after H&M had expressed concerns about alleged human rights abuses in Xinjiang.

Helmersson said the situation in China, which accounted for around 5% of group sales last year, remained complex and declined to comment further.

China is one of H&M’s top clothing suppliers and fourth-biggest market by sales. Other big brands were also hit by consumer boycotts in China for raising similar concerns.

Helmersson said H&M was closely following the situation in Bangladesh – another big supplier – after a record spike in coronavirus cases prompted the country enforce a strict lockdown on Wednesday, although garment factories remain open.

For its second quarter, H&M swung to a pretax profit of 3.59 billion crowns ($419 million) from a year-earlier loss of 6.48 billion, ahead of analyst forecasts.

“As more and more people are vaccinated and restrictions are eased, the world is gradually opening up and customers can once again visit our stores,” Helmersson said. “Online sales have continued to develop very well even as the stores have opened.”

H&M said 95 of its 5,000 stores globally remained temporarily closed due to restrictions currently, against around 1,300 at the start of March.

H&M said there were very good prospects of a dividend for 2020 in the autumn. It did not propose one at its annual general meeting in May due to the pandemic but flagged it would probably pay one later in the year.

Also on Thursday, Primark raised its full year profit outlook after sales at stores beat management expectations in all markets.

COVID-19: Indonesia to bring in emergency measures after spike in cases