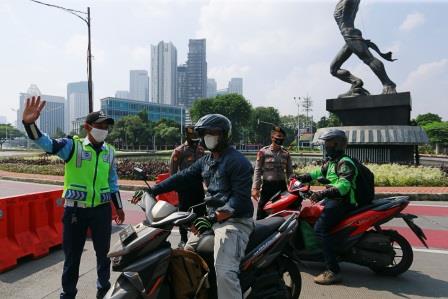 JAKARTA (Indonesia): Indonesia expects COVID-19 infections to keep rising for up to two weeks before curbs introduced on Saturday on more than 100 million people begin to reduce cases, a government minister said.

As it battles one of Asia’s worst coronavirus outbreaks, the world’s fourth-most populous nation has seen record new infections on eight of the past 12 days, with Friday bringing 25,830 cases and a record 539 deaths.

Saturday’s curbs on Java and Bali islands – from tighter travel checks to a ban on restaurant dining and outdoor sports and the closure of non-essential workplaces – are to run until July 20, but could be extended, if needed, to bring daily infections below 10,000.

“In the next 10 days, in my opinion maybe two weeks, cases can continue to rise” as infections before the curbs took place are now in incubation period, said Luhut Pandjaitan, a senior minister overseeing the government’s COVID-19 response.

“This two weeks is a critical time for us,” he said.

Police threw up road blocks and more than 400 checkpoints across Java, the archipelago’s most populous island, and the resort island of Bali to ensure people stay at home, with more than 21,000 officers deployed to enforce the curbs and aid random coronavirus testing.

Vaccinated travellers with a negative swab test will be permitted to make long-distance journeys, however.

Traffic and commuter lines in the capital Jakarta in western Java were much lighter than usual on Saturday, but some residents still flouted the curbs to jog and ride their bicycles, even though the main road was blocked.

Jakarta resident Clement, 45, who was strolling the street with his wife, told Reuters he disagreed with the curbs, even though he has lost a friend to the respiratory disease.

“We know it’s dangerous, but at least if we want to go to the mall, or somewhere, we should just show our vaccine (certificate) and maybe an antigen (test result),” he said.

The highly infectious Delta variant, first identified in India where it caused a spike in infections, is spreading in Indonesia and pushing hospitals across Java to the brink.

With medical facilities near capacity, demand has surged for oxygen and drugs for many people isolating at home, driving retail prices up in pharmacies and online marketplaces.

The health ministry has capped prices of drugs such as Favipiravir, Remdesivir and Ivermectin, Health Minister Budi Gunadi Sadikin said.

Authorities are also trying to speed their vaccination drive in the areas with the worst outbreak. Its inoculation campaign has covered just 7.6% of the 181.5 million people targeted for shots by next January.

Jakarta this weekend launched mass vaccination at a football stadium for children aged 12 to 17, aiming to inject more than 20,000.

Indonesia is set to receive vaccines donated by foreign countries. Until now, it has relied mainly on a vaccine from China’s Sinovac Biotech.

Indonesia’s tally of infections stands at 2.2 million, with a death toll of more than 59,500.