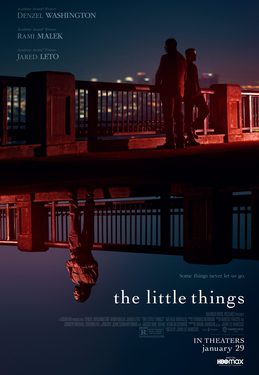 The little things stars A-list actors such as Denzel Washington, Jared Leto and Rami Malek. Directed by John Lee Hancock who is best known for much acclaimed movie The Blind Side, the Little Things is touted as a neo-noir crime thriller.

The movie revolves around Deputy Sheriff Joe “Deke” Deacon, played by Washington, who decides to tag along with Sgt. Jim Baxter, played by Malek in the hunt for a serial killer.As the investigation proceeds Deke sees a similarity in a case he was part of once. Baxter, who is unaware of this, is also in the dark about Deke’s history, which is closely associated with this case, and could even threaten the investigation.

With the kind of talents this movie has, it is a shame that the plot simply failed them. Except for the opening scene, nothing else is gripping about the film. The plot seemed loosely fit, the twists were unconvincing. It looked like the actors were struggling to pull off something that the plot failed to even convey to them. It does not offer anything new and Jared Leto was simply wasted in the role of a suspicious junky.  The story must have felt good on the papers. But a police officer with a troubled past and a failed family life, trying to retrace his steps by helping another young police officer seems like a story we have seen too many times before. The movie drags on making it a painful watch. The movie is currently available on HBO Max.